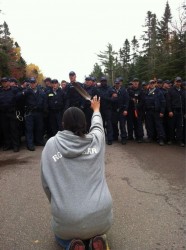 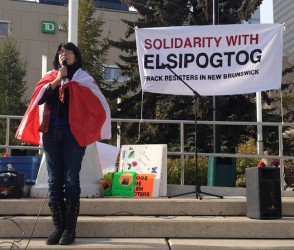 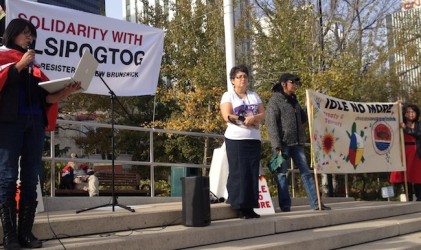 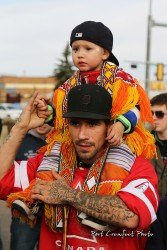 “Oh my gosh, they’re going to kill me before hearing me out,” Mi’kmaq anti-fracking blockader Amy Sock thought as camouflage-clad tactical police with assault rifles and attack dogs chased her down.

“My spirit told me to just run,” she told Windspeaker. “I’ve never seen rifles like that; they were really big, Afghanistan-style guns. When I saw them, when I saw those outfits with the dogs, I knew, ‘This is it’ ... I could have easily been shot. But my spirit is unharmed, it’s still strong.”

Sock, a member of Elsipogtog First Nation involved in a months-long fight against shale gas exploration by SWN Resources, arrived at the blockade on Oct. 17 after dropping her children off at school.

When she saw hundreds of riot police lined up across the road near the protest encampment – ostensibly to serve a court injunction in favour of the company – she approached waving a white towel in hopes of negotiating a solution.

Instead, she claims an officer punched her in the head so hard her glasses flew off, sparking an escalating confrontation that ended with 40 arrests, six torched police vehicles, and RCMP allegations they found bombs, rifles and bear spray in the camp. Media were barred from the site, and could not verify those claims, and some have speculated that several new faces that morning could have been police infiltrators.

Despite social media speculation about police provocateurs torching their own cars, an eyewitness said the vandalism was carried out by known anti-fracking warriors. Police also said someone attempted to burn down the local RCMP station in the middle of the night Thursday after the raid.

The massive police raid – with estimates between 200 and 700 officers deployed with live ammunition and armoured troop carriers – sparked a flurry of at least 50 solidarity protests across Canada and even in some American and European cities. But police insist they swept in because of alleged threats against private security contractors the night before.

“The weapons and explosives we seized show that this was no longer a peaceful protest and there was a serious threat to public safety,” RCMP assistant commissioner Roger Brown told reporters on Oct. 18. “Some in the crowd threw rocks and bottles at (police) and sprayed them with bear spray.

“Setting police cars on fire created a dangerous situation for everyone in the area, and it was at that point that police were forced to physically confront some in the crowd who refused to obey the law.”

Since early this summer, Sock has been part of a group of Mi’kmaq and non-Native protesters raising the alarm about SWN Resources. Residents fear seismic testing and search for shale gas will lead to polluted water through the controversial fracking process, in which high-pressure chemicals explode the earth deep underground.

Leaders of Elsipogtog First Nation have supported the blockade with band council resolutions, and have attempted unsuccessfully to negotiate with the province to prevent fracking on the traditional lands near their reserve.

“There’s no guarantee fracking will be safe,” Sock said. “To me, if there’s no guarantee it’ll be safe, we should not even bother.
“Water is a source of life, it travels far and wide. Without it, not even an insect will survive. They’ll pollute our water; no one has ever said that it won’t ...  It’s irreparable harm. We will not put up with that, if there’s any doubt that our water is in danger. We have to stand up.”

As reported by Windspeaker in July, the blockade has seen previous arrests as well as arson against SWN equipment. But Sock said the conflict came to a head on Oct. 17 when police raided the camp before dawn with pistols drawn, arresting several sleeping Mi’kmaq warriors at gunpoint. During that operation, police said at least one Molotov cocktail was thrown from the forest.

But supporters of the blockade say the police assault – photos show officers pointing live sniper rifles at unarmed protesters – was unprovoked and amounts to a violation of the Mi’kmaq peace treaty with the Crown.

Pam Palmater, head of Ryerson’s Centre for Indigenous Governance, said the confrontation reminded her of the 1990 standoff at Kanesatake, the so-called Oka Crisis: “overkill to the max.”

“You’re talking drums and feathers versus assault rifles, Tasers and pepper spray,” the Mi’kmaq academic told Windspeaker. “As soon as you send in RCMP or military, heavily armed, it stops being a peaceful protest.

“You can’t call sending in 200 RCMP with dogs and snipers, attacking protesters, anything other than hostile. They made a direct choice to violate the peace treaty.”

Palmater believes that it’s no coincidence that police only decided to enforce SWN’s injunction within days of the departure of UN Indigenous envoy James Anaya, and the Conservative government’s Throne Speech outlining its aggressive resource extraction priorities.

But with police withdrawing after a day of unrest, she declared the standoff and solidarity protests a “victory.”

“It showed that we as Indigenous peoples actually have the power to deal with this stuff – to stop what’s happening on our land,” she explained. “SWN and New Brunswick are now partnering together to get an injunction to prevent any future protests. That’s not conducive to a negotiated solution. It will fuel the fire.”

(On Oct. 21, a New Brunswick judge lifted an injunction that ordered the end to the blockade. Judge George Rideout said the injunction was no longer required because equipment and vehicles owned by SWN Resources had been removed and the protesters were no longer blocking the road.)

But although burning police cars and a televised Native standoff drew comparisons to Oka  in 1990 or  Ipperwash in 1995 – where unarmed protester Dudley George was killed by police – the author of Resource Rulers: Fortune & Folly on Canada’s Road to Resources – said that the parallel ends there.

“I don’t think this is another Oka or Ipperwash,” Bill Gallagher said. “Both of those had a burial ground connotation that went to the very heart of what Natives are prepared to go to the wall for and protest. Now the Native ability to stand up and push back has never been more strident and thought out, often with allies like eco-activists.”

However, in New Brunswick, an APTN reporter heard one police officer shout at blockaders, “Crown land belongs to government, not to f**king natives.” Those words echoed Ontario’s Ipperwash-era premier Mike Harris, who, it was reported, told his staff, “I want the f**king Indians out of the park,” immediately before George’s killing.

As Indigenous people and supporters stage solidarity rallies and several highway blockades across the country, the crisis in New Brunswick could still follow the path of Oka and “spin off and ... replicate or draw adherents right across the country,” he said.
“The trouble with it happening the way it has is that Canadians have to get a crash course in why they have to be prepared to take a deep breath and cut First Nations some slack until they get all the facts,” he argued. “It’s incumbent for Canadians to get their heads around it and understand that all these events are interconnected with history.”

Sock sees a direct parallel to the Oka Crisis. At age 20, she journeyed to Kanesatake to support the Mohawks in their fight against a golf course on their cemetery.

“When you’re a First Nations person, you have a strong connection to Mother Earth ... We’re very proud of that. To us, it doesn’t matter if they drag us around or throw us in jail. We have no other choice. We can’t trust the government and we can’t trust the RCMP to protect us. We have to do it ourselves.”