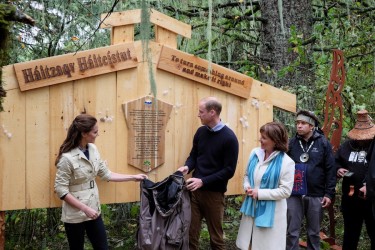 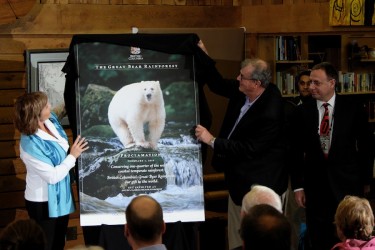 Dzawada’enuxw Nation Chief Willie Moon is giving notice to all logging companies and tourism agencies: deal directly with his First Nation and don’t cite the Great Bear Rainforest Agreement as a talking point.

As far as Moon is concerned, Dzawada’enuxw traditional territory in the Great Bear Rainforest is not part of the Queen’s Commonwealth Canopy. The canopy was endorsed when the Duke and Duchess of Cambridge visited B.C.’s central coast during their recent Canadian tour.

The agreement establishes protected areas and ecosystem-based management operating areas. Just over 2-million hectares in the north and central coast – one-third of the region – is protected from logging in newly-created conservancies, parks and biodiversity areas.

“From what I hear it’s very limited (protection) because high up in the mountainsides here we’ve got a lot of old growth timber. That’s what they’re looking for,” he said. “When I saw a map of the Great Bear Rainforest we only had two or three small conservancies.”

Aside from lack of protection, Moon contends lack of consultation on the part of the province. He said a visit by Forestry Minister Steve Thomson to his village was a discussion meeting only.

“I told him, ‘This is not consultation. This is information sharing right now until we get caught up with what’s going on’,” said Moon. Later, he says, Thomson claimed that the government had consulted with Dzawada’enuxw Nation.

“We haven’t given consent to this whole process of the Great Bear Rainforest,” said Moon.

And because of that, logging companies will be dealing directly with Dzawada’enuxw Nation. Moon fully expects industry to respect his First Nation’s position and to not do an end run and go to the government.

“Right now we’re sitting with one of the logging companies and hashing out an agreement. We’ve gone pretty far with it,” he said.

Moon insists that whatever agreement Dzawada’enuxw Nation works out with the logging company will be better than the protection afforded through the Great Bear Rainforest Agreement.

Twenty years ago, said Eduardo Sousa, senior forest campaigner with Greenpeace, a single First Nation would not have had the authority to substantially deal with industry nor be able to pull its traditional territory from an agreement.

“Twenty years on, with the Williams case and all the important court cases that have happened, and also Canada signing on to the United Nations Declaration on the Rights of Indigenous Peoples … those pieces are absolutely critical. So I think the Nation has a stronger case, but I suspect, just like Site C and LNG, it will probably entail going to court. And so they need to be prepared for that,” said Sousa.

“That’s my worry. I can see how that will play out.”

Sousa also believes that even if a First Nation has signed the Great Bear Rainforest Agreement, it can deal with logging companies on its own terms.

“At the end of the day, these agreements were never intended to compromise any treaty or rights and title sorts of matters,” he said.

Sousa believes the Great Bear Rainforest Agreement has given the signatory First Nations a greater say in their territories where it comes to logging and also a greater share in resource revenue.

“So in that sense it’s been really important,” said Sousa. “It is not a perfect agreement, but it’s something to build on.”

He says the agreement is a “different way” for First Nations to assert their treaty rights in their territories without having to go through the lengthy and costly process of treaty negotiating or a court battle.

Sousa says Greenpeace has supported the government-to-government process that the Great Bear Rainforest Agreement represented, noting that the agreement is “intended to give greater say, equal if not more say, to First Nations of how their territories are managed or governed when it comes to … logging.”

Sousa, who has been involved in the process for the past eight years, says Greenpeace, along with ForestEthics and Sierra Club BC, worked with the companies to support the creation and implementation of the agreement. The recommendations then went to government - provincial government, and the hereditary and elected First Nation governments. The three environmental organizations were also instrumental in pressuring the province to implement the agreement.

“For my perspective that’s been the right process, but I’m a little concerned if all Nations were not properly consulted,” said Sousa

He adds that Dzawada’enuxw Nation has reached out to Greenpeace and Sousa hopes to meet with Moon soon.

“There’s been some background discussions, but I didn’t know to the degree of their disenchantment because it’s been like texting and email and that sort of thing,” he said.

Moon says he’s open to discussing the agreement with the government.

“But it’s up to them to come back to the table and it has to be meaningful, not just throw me a couple of pebbles. ‘These are for you and your people.’ It doesn’t work that way anymore,” he said.

Moon stresses that only a vote by his members will mean true consultation has taken place.

Twenty-eight First Nations have traditional territory in the Great Bear Rainforest. According to a BC government news release, 26 signed the agreement. Moon says that along with Dzawada’enuxw Nation, Kwikwasut’inuxw Haxwa’mis First Nation, also part of the Musgamagw Tsawataineuk Tribal Council, did not sign the agreement.

The Great Bear Rainforest Agreements were announced in 2006, and fulfilled in 2016, when 85 per cent of the forests of the region were permanently placed off-limits to industrial logging, and the remainder placed under stringent guidelines for logging. The Great Bear Rainforest (Forest Management) Act was introduced by the government on March 1, 2016, as a means to legalize protection and enforce the new logging regulations.