Prophecies of old coming to fruition in fight for Mother Earth 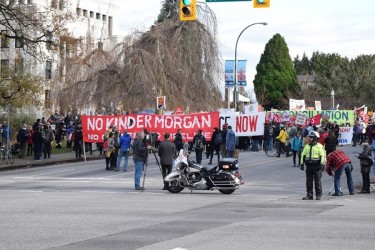 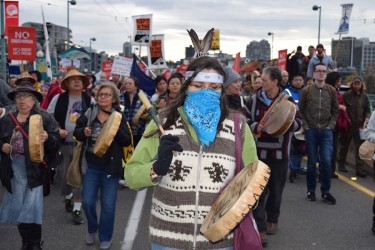 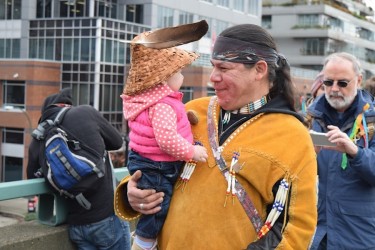 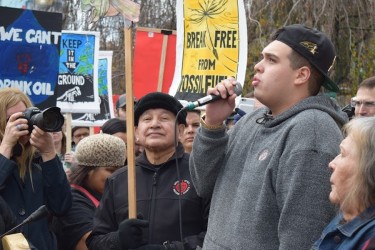 Several thousand people marched in Vancouver in opposition to Kinder Morgan on Saturday, Nov. 19, as many prepare to face arrest if the pipeline project is approved.

The unprecedentedly huge rally drew Indigenous people from diverse nations across Western Canada who spoke, sang and drummed alongside politicians on all levels who oppose the pipeline.

The project would nearly triple the capacity of the pipeline that carries crude oil from Alberta to Burnaby, B.C., and increase tanker traffic in the Burrard Inlet by sevenfold.

Amy George, an Elder from Tsleil-Waututh nation on the Burrard Inlet, told the crowd that a tanker spill would devastate her territory’s already ravaged shoreline.

“I hope [Prime Minister Justin Trudeau] is sitting down and watching this because there’s too many of us saying no. We are the people, and we are the ones this is going to affect.”

Later, the Union of B.C. Indian Chiefs launched a campaign that encourages people to pledge to do “whatever it takes” to stop the pipeline if it’s approved.

Anyone who signs up at www.coastprotectors.ca will be added to a list that will join together to create strategies and stand on the front lines to stop the project.

By Monday afternoon, nearly 3,000 people had signed on.

At the rally, several prominent politicians vowed to risk arrest if construction on the Kinder Morgan expansion begins, including Burnaby Mayor Derek Corrigan and Green Party Leader Elizabeth May.

Corrigan has been a prominent opponent of the project in the courts and at National Energy Board hearings, and he said he will continue to fight in any way he can.

“I want to know how many of you will be standing there with me.”

UBCIC president, Grand Chief Stewart Phillip, told the crowd that he believes that mass displays of opposition of big oil being seen now, from B.C. to Standing Rock, were prophesized centuries ago by Indigenous leaders.

“What we’re witnessing here today is the beginning of something incredibly powerful,” he said.

“I believe that those times are upon us now.”