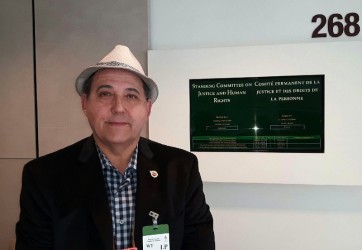 Change an unethical practise in bail hearing proceedings in criminal courts in the province, says the Aboriginal Affairs Coalition of Saskatchewan.

Kim Beaudin, president of the AACS, says the organization is petitioning the courts to do away with a practice that allows police officers to take the place of Crown Prosecutors in “after hours” trials.
Judges who normally appear during weekday and daytime hours are replaced by Justices of the Peace during evenings and weekends. Police officers then often assume the responsibility of the Crown during that time.

“Under Section 515(1) of the Criminal Code… police have no authority to do that, whether it’s municipal, or government, or the RCMP. They do the arresting, then they turn around and act as the Crown,” said Beaudin.

“When they do that, police officers don’t have full disclosure… they don’t have a whole file on an individual. So there’s not a lot of information to go on, whereas the prosecution would have that and could make a better decision,” he said.

During those bail hearings, the decisions made about whether to let someone go freely into the community while awaiting their trial, or whether to keep them incarcerated, are often made with heavy consideration of what the prosecution has to say.

For Beaudin, this is an issue for everyone, but for Indigenous people specifically, because they are a group so marginalized, they often don’t have the resources or the knowledge needed to ask for their own adequate court representation.

“You can see the effect here in Saskatchewan. Eighty-five per cent of incarcerated people are Indigenous people. There’s hundreds of people incarcerated because they have no money for a lawyer and no resources. Whereas someone with the resources would get picked up on a Friday and be out the next day,” he said.

And not only do police officers not have the same access to the information actual Crown prosecutors have, but they also lack the same level of objectivity.

Even if the officer in the courtroom at the time is not the same officer who did the arresting, they work closely enough with one another that they can carry the same biases, said Beaudin.

“We’re dealing with the issue of ‘carding’ here in Saskatchewan. We call it racial profiling. And that would certainly play a role with respect to how well a person is doing their job, whether it be RCMP or police services in Saskatchewan,” he said.

“We’re supposed to have faith in the justice system itself, and it should be there to protect the public as well,” said Beaudin.
Beaudin was inspired by a report released last week from Alberta Justice, though having been a Justice of the Peace for  five years previously, he was already very familiar with the issue.

The writers of the report recommended  that the practice change, outlining two specific ways: either stop the process altogether and always having an actual, qualified Crown prosecutor involved, or have some kind of specific qualification process for police officers who request to fit into that role.

Beaudin has spoken with the Canadian Human Rights Commission about his concerns, and they’ve agreed with him. He is now waiting for a confirmation of the date and time for a meeting with the Attorney General.

So while it’s a widely-accepted practice—in both Saskatchewan and Alberta—Beaudin says the bottom line is it breaches the Criminal Code, and he hopes he and the AACS find success in their efforts to reform it.