Is Ontario Premier Kathleen Wynne the new face of colonialism in Canada? 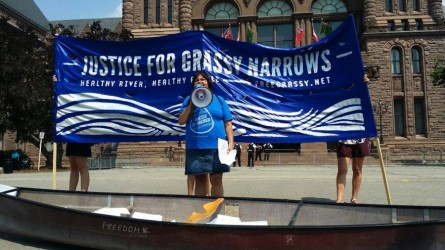 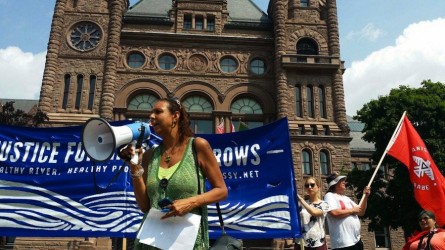 Grassy Narrows First Nation and supporters continue to hike up the pressure on Premier Kathleen Wynne and the Ontario government to clean up the Wabigoon-English River systems of toxic mercury waste.

On July 7, prominent environmental, labour and social justice leaders marched through downtown Toronto to the Ontario Legislature where they delivered a canoe filled with letters and petitions representing more than 35,000 people.

They were met with a strong police presence and a fence barring entry to the legislative buildings.

The signatures delivered were collected from petitions and online actions from Leadnow, the David Suzuki Foundation, Amnesty International, and the Council of Canadians.

Other groups involved in the day’s action, included the Canadian Labour Congress, CUPE, and Free Grassy.

Speakers at the press conference following the march expressed anger and frustration at the government’s lack of commitment to Grassy Narrows, in particular, and to Indigenous people, in general.

Reconciliation and renewed relationships are “just pretty words,” said Dawn Bellerose, the Aboriginal representative on the board of CUPE.

“What does that really mean, because they’re not doing it,” she said. “It’s time they started taking some action. The people of Grassy, they’re Canadians, they’re human beings. They need to have clean water.” CUPE is Canada’s largest union, representing more than 635,000 people across the country.

She said it was very clear to her that race was an issue in the government’s lack of action on Grassy Narrows. If this kind of situation occurred with the Don River, the Humber River or the Rouge River, it would be cleaned, Walker said.

More than 50 years ago, the Dryden Chemical Company dumped 9,000 kilograms of toxic mercury waste into the waterway that provided fish, clean water and an economic base for Grassy Narrows residents. The Ontario government has done nothing to clean up the river.

A report by three renowned scientists that was released a month ago said the mercury can be cleaned and the water and fish made safe for consumption. Ontario has not committed to a clean-up of the river.

Following a visit to the community by Ontario’s ministers of Indigenous Affairs and the Environment on June 27, the provincial government committed $300,000 to conduct testing of the water, fish and sediment.

“Decades of inaction by successive governments are a stain on Canada’s human rights and environmental record and depicts the history of environmental racism,” Walker said. “Prime Minister [Justin] Trudeau, Premier Wynne, it’s been over 50 years of inaction. Clean up the river and stop poisoning generations.”

Amara Possian, 27, is campaign manager with Leadnow, an independent advocacy organization with 500,000 members across Canada.

“Six years before I was born,” she said, “the Ontario government heard that there were safe ways to clean up the river. For my entire lifetime, the government has been making excuses and refusing justice for Grassy Narrows First Nation.” The Leadnow community stands in solidarity with Grassy Narrows, Possian said, “and it’s time for Premier Wynne to clean up the river.”

“We all know now what only some people knew years ago,” said Calzavara, “that the water can be cleaned, that Grassy Narrows can be returned to what it once was, a thriving and healthy community.

“At this point Kathleen Wynne has to wonder – is she going to act for Grassy Narrows and fulfill our responsibilities as treaty partners, or is she going to become the new face of colonialism in Canada?”

Calzavara said their members had sent 1,400 letters to Premier Wynne over the last few days. “The letters ask for her to fulfill her treaty obligations,” he said, “and to provide the best possible health care for mercury survivors, to compensate those impacted by mercury, to fund an environmental health monitoring station run by Grassy, to put in place a comprehensive monitoring program of the pollution sources, and last of all, but most important, to remediate the river.”

Connecting with the press conference by phone was Chrissy Swain, a member of Grassy Narrows who is a young mother and grandmother. Swain thanked the gathering for their support, “and keep supporting us until the river is cleaned up,” she said. “We really need this. I have a grandson now and I look at him and I want him to be healthy. I want him to have clean water because water is life,” she said.

“We believe that the science exists to clean up the watershed so that the people in Grassy Narrows can eat the fish and continue their traditional way of life once again.”

Amara Possian of Leadnow said that Premier Wynne was out of town but that a representative from her office was expected to take delivery of the letters and petitions. By 1:30 p.m. that representative had not arrived.