One year in and we’re falling backwards [editorial] 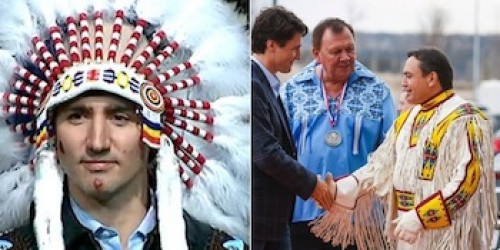 That old mistrust is creeping in. And it all started out so hopeful… a new day, a new relationship, and a bright new enlightenment after the long dark bleak winter of Conservative rule.

But today, we’ve got to call it. The Liberal Party of Canada has duped us. Instead of ‘sunny ways,’ we’re getting a long familiar shadow cast over all our dreams. The bright new day promised by Prime Minister Justin Trudeau is diminished in our eyes. He sure talks fine words, but he’s like every other top dog that Canada has elected. Full of himself and full of promises he can’t, or won’t, keep.

First Nations leaders aren’t ready to give up on him. How could they, really? What are the options for them? But we’ll tell you something that you can take to the bank. The moment we heard the Justice Minister say the government had no intention of adopting the United Nations Declaration on the Rights of Indigenous People into law, we knew the jig was up. No new day, no new way; just election sweet nothings that had been blown in our ears. Now the romance is over, like the blush off a rose, one year after Trudeau was swept into power.

Of course, we got suckered. We wanted it so much. And to think he even installed as Justice Minister Jody Wilson-Raybould. She’s a respected First Nations leader who held positions that pushed up strongly against government in the past. That was the icing on the cake for us. Why would Trudeau do that if he wasn’t sincere? Why indeed?

In an article in this paper, Assembly of First Nations National Chief Perry Bellegarde has called into question Wilson-Raybould’s commitment to Indigenous rights and issues. That’s a harsh indictment from the chief (with a dollop of some bitter Indian politics on top, we suspect). Still, the question needs to be put forward. Has the Justice Minister been co-opted?

“How do we partner with [Indigenous people in Cabinet] to make sure that they’re espousing the rights agenda, they’re espousing everything they stood for and worked for all their lives?” the AFN chief is asking. This is her added burden in this role.

After being elected one full year ago, Trudeau and company have accomplished very little for us. They’ve even ignored their own country’s Human Rights Tribunal leaving our children in care without equitable funding, despite orders from the Human Rights Commission to step up and be the country they think it is.

Trudeau, et al, in fact has put many of our territories in harm’s way. The Site C dam approval is a case in point. That Canada, in this day and age, has given the OK to flood wide tracks of traditional territory and displace Aboriginal people for a benefit that won’t come for many decades, is stunning. It’s regressive, and it’s hypocritical, and the antithesis of what we were promised.

And the PM is not done. There is more disappointment and regret for us coming down the pipeline.

Just a few years from now when we’re still waiting for the benefits to flow from this nation-to-nothing relationship we have, Trudeau and his ilk will be around to us again, kissing our babies and pressing our palms.

Fool us once, shame on them. But fool us twice… well, then we just have it coming.

Besides, we have other options than dropping a ballot in a voting booth once every four years to get the attention we deserve. We used the voting tool last year, but soon it may come time for us to employ others.

We’re so inspired by the resistance shown the North Dakota Access Pipeline. The courage, the bravery that people have shown makes us proud.

Making things uncomfortable for government, corporations, and Canadians, and making it difficult to get things done can again be a tried and true method of our peoples.