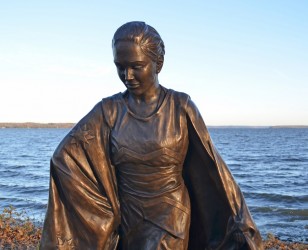 Canada is looking for a woman’s image to grace one of a series of bank notes to come out in 2018 and has called for nominations. The decision that faced the Native Women’s Association of Canada wasn’t who to nominate, but whether to participate at all.

A monument commemorating Shannen Koostachin, a young Cree activist from Attawapiskat First Nation, was unveiled on Oct. 24, 2015, at the New Liskeard waterfront. The bronze sculpture is the work of  Tyler Fauvelle.  (File photo)

Critics claimed being part of the process and having an Indigenous woman’s image put on a Canadian bank note ignored how the federal government has treated Indigenous peoples throughout history.

“We could not see it as a political statement not to participate, but instead (as a decision) making Indigenous women in the history of Canada invisible yet again,” said Dawn Lavell-Harvard, NWAC president.

The controversy may continue, however, with the names NWAC did choose to put forward. One nominee doesn’t meet the criteria established, and the other two have very colourful aspects of their lives.

“For any Indigenous peoples trying to break out of the place that society has tried so hard to keep us becomes controversial,” said Lavell-Harvard.

“These particular women displayed the kind of courage and strength and resilience that we feel is symbolic of the original inhabitants of this country, of the original women,” said Lavell-Harvard.

Koostachin doesn’t meet the criteria set by the federal government. To be eligible, nominees must have passed away at least 25 years ago. Koostachin died only six years ago in a car accident.

Lavell-Harvard says one of the reasons NWAC nominated the 15-year-old Cree education advocate from Attawapiskat First Nation was to demonstrate the arbitrary-nature of setting the 25-year deceased criteria.

“She was such a remarkable young woman and deserves to be held up as that symbol of hope for Indigenous children, for the future,” she said.

Cindy Blackstock, executive director of the First Nations Child and Family Caring Society, applauds NWAC for pushing that guideline.
“Having a young person that has been known to many of the young people today and has inspired them to engage in reconciliation should be front and centre,” said Blackstock.

Shannen’s Dream, named for Koostachin, is a program embraced by the Caring Society, which advocates for the “safe and comfy” schools that Shannen wanted.

Blackstock says she sees Shannen’s photograph on many “heroes walls” in both Aboriginal and non-Aboriginal schools throughout the country.

“One of the things we need to get over is having these people on the money that nobody has any relationship with,” said Blackstock.

NWAC’s second nominee—Johnsonwas one that topped the lists of both Indigenous and non-Indigenous women. Johnson, the daughter of Mohawk Chief George Johnson and English woman Emily Howells, was a well-known poet and performer.

“She was very much a spokesperson for Indigenous concerns. Through her poetry and performances, she addressed injustices,” said Dr. Sarah Carter, with the faculty of Native Studies at the University of Alberta, who put forward Johnson’s name.

However, there are those who criticize Johnson’s theatrics, saying she played into stereotypes by performing in a fringed buckskin costume and reciting her “Indian” poems, and then donning a formal evening gown and reciting her more romantic pieces.

Her critics claim the costume changes highlighted the “savage” and “civilized” aspects of her heritage. Those who support her say her costume change forced audiences to accept her as both Indigenous and English-Canadian, and to recognize diversity.

Carter, who uses Johnson’s poem “Cry of an Indian Wife” in her classes, says she is aware of the dress change that Johnson performed.

“I would assume when she had her Indigenous dress on that she was every bit as articulate, and arguing for acceptance and reconciliation,” said Carter.

Aquash, although from Nova Scotia, was an activist with the American Indian Movement in the United States.

Her nomination, says Lavall-Havard, is an acknowledgement that borders, such as that between the U.S. and Canada, are arbitrary and not recognized by Indigenous peoples.

Aquash was murdered in 1975, her body not discovered until 1976. It wasn’t until 2004 and 2011 that two men from AIM were convicted in her death. There is speculation that she was an informant against AIM and that was what led to her death.

“(Aquash) was very strong and determined but there’s so much about her murder …and it seems to still largely be a mystery and I think it’s unfortunate so much attention has been paid to that rather than what she accomplished,” said Carter.

That appears to be the case, as recently as last month, when Assembly of First Nations National Chief Perry Bellegarde reiterated a call for the release of American Indian Movement member Leonard Peltier, who was jailed in the United States, charged with the murder of two FBI agents during an occupation in South Dakota in 1975.

Aquash’s daughter Denise Maloney Pictou took exception to Bellegarde’s plea stating that Peltier is connected to the men who were found guilty of killing her mother, members of AIM.

A news release issued by Aquash’s family states, “Family of MMIW Annie Mae Pictou Aquash have fought one of the longest campaigns to seek justice in the murder of their mother. Annie Mae is from the Sipeknekatik band in N.S. Family and community were shocked and dismayed to hear of the AFN endorsement.”

Along with being on the front line for marches and occupations with AIM, Aquash also taught school in Maine, focusing on Native history and values in order to instill pride in her Indian students.

“I can tell you that whoever is put upon this bank note is going to be subject to intense scrutiny and criticism,” said Carter. “And I don’t think you’re ever going to find one stellar perfect person, male or female.

“We have so many males on these bank notes who were full of all sorts of imperfections.”

Lavell-Harvard says that these names were put forward by the grassroots.

“These are women, who at the grassroots levels, were held up by their communities as symbols of their strength and courage,” she said.
Prime Minister Justin Trudeau and Finance Minister Bill Morneau announced on International Women’s Day that when the next series of bank notes came out in 2018, one would bear a woman’s portrait – and not the Queen.

Nominations had to be submitted by April 15.