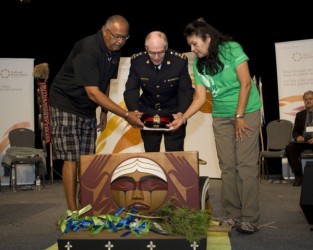 The Saskatoon Police Service has made changes to their policies that will allow investigations to start more quickly on missing person’s cases, and it may be the first such move from a police service in Canada.

The Police services has also created a waiver form that allows the police to share information with the chief of the First Nation from which the person is missing, said Saskatoon Police Chief Clive Weighill. That way, Weighill says, the chief is aware of the work undertaken by the police force and can reassure family members that an investigation is ongoing.

Weighill’s announcement of the revamped Missing Persons Investigation Policy garnered applause from the crowd that had gathered in a hall at to listen to Expressions of Reconciliation. It was the final day of the fourth national Truth and Reconciliation event which took place in Saskatoon from June 21 to June 24.

“Gone are the days when we wait. We will take a report immediately,” he said. “If there’s any indication that the missing person has been living a high-risk lifestyle, the investigation receives the highest priority.”

The new Saskatoon police headquarters will include a small memorial on the grounds to honour missing Aboriginal women, he said. The memorial will serve as a spot to begin or end activities promoting awareness of the missing women’s issue.

“It will also provide a place for families of missing persons to reflect,” said Weighill.

Changes in attitude and police policies are in many ways due to the Stonechild Inquiry of 2004 and the Commission of First Nation and Metis People Justice Reform of 2004-2005.

The Reform commission was chaired by Wilton Littlechild, now a commissioner on the Truth and Reconciliation Commission.

Neil Stonechild, 17, was a First Nations youth who died in 1990 of hypothermia in the heart of winter. It was alleged that he had been picked up by Saskatoon police officers and then released in an industrial area in the outskirts of the city. Not wearing winter clothing, Stonechild froze to death. No criminal charges were laid in Stonechild’s death.

“I stand before you today with a message of positive change in relation to policing and healing of relationships,” Weighill said.

He pointed out that all the recommendations from both inquiries had been implemented. Weighill highlighted a number of those recommendations, including the creation of a cultural relations unit within the police service; diversity training, both during the academy and regular in-services; recruitment of more First Nations member, which is beginning to show with currently 11 per cent of SPS members being Aboriginal; and the inclusion of GPS in all cruisers to substantiate where vehicles have been during a shift.

The handling of complaints against the police has undergone radical change. No longer are the complaints lodged directly with and investigated by the SPS, but complainants have the option to take their concerns to the special investigative unit of the Federation of Saskatchewan Indian Nations or to the Public Complaints Commission.

Investigation is no longer carried out by the SPS. The lone responsibility of the SPS chief is to find out what disciplinary action is to be undertaken.

“I really applaud that the FSIN has come on board as an intake through their special investigation unit because I really do think it makes it a lot more friendlier system for people to come forward,” said Weighill.

He also notes that the SPS has a number of committees that work toward “foster(ing) better relations and inclusion with the Aboriginal community.”

Aside from survey results that show an increased trust toward the SPS by Aboriginal people, Weighill noted that the FSIN presented the police with an eagle staff “in appreciation of our role in protecting Aboriginal people.”

Weighill is proud of the eagle staff, saying the SPS has worked hard to earn the honour.

Photo: Courtesy of the Truth and Reconciliation Commission