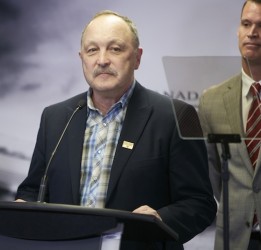 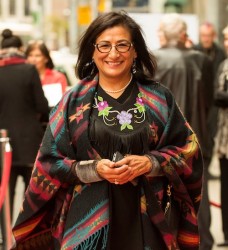 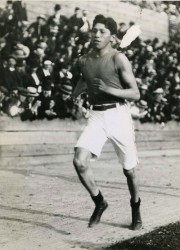 The Aboriginal content at Canada’s Sports Hall of Fame will soon be expanding. That’s because former National Hockey League star Bryan Trottier is one of seven individuals who will be inducted this year into the hall based in Calgary.

Trottier, who has Métis, Cree and Chippewa ancestry, is a seven-time winner of the Stanley Cup. He won six championships as a player and one as a coach.

Mario Siciliano, the CEO and President of the hall, is thrilled with all of this year’s inductees.

“We are proud to be able to share the stories of the achievements of the Class of 2016 so that we can inspire all Canadians to be the best they can be in all aspects of life,” he said. Trottier, who is from Val Marie, Sask., played 18 seasons in the NHL. He was a key member of the New York Islanders who captured the Stanley Cup four consecutive years, from 1980 to 1983.

Trottier, who is now 60, also played for the Pittsburgh Penguins when they won back-to-back league championships in 1991 and ’92.

Trottier earned his seventh Stanley Cup in 2001, while working as an assistant coach with the Colorado Avalanche.

During his pro career Trottier averaged more than a point per outing. He appeared in an even 1,500 regular season and playoff contests, collecting 1,609 points, including 595 goals.

Trottier also was singled out for some of his feats during his career. For example, in 1979 he won the Hart Trophy for being the NHL’s most valuable player, as well as the Art Ross Trophy for racking up 134 points in 76 games and was the league’s top scorer.

Trottier was also awarded the Calder Trophy for being the NHL’s top rookie in 1976. And he was presented with the Conn Smythe Trophy in 1980, for being the league’s playoff MVP.

Trottier will be joining eight other Aboriginal people who have already been inducted into Canada’s Sports Hall of Fame. The list of this group follows:

Tom Longboat—A long-distance runner from Six Nations in Ontario, Longboat was one of the country’s heroes in the early 20th century. He won numerous amateur and professional races, including the 1907 Boston Marathon. He was inducted into the hall posthumously in 1955, six years after his death.

Alwyn Morris—A Mohawk kayaker from Kahnawake, Morris teamed up with Hugh Fisher to win two medals at the 1984 Los Angeles Olympics. The pair captured the gold medal in the K-2 1,000-metre event and added a bronze medal in the K-2 500-metre race. Morris was inducted in 2000.

Sharon and Shirley Firth—The twin sisters from the Gwich’in First Nation in the Northwest Territories were accomplished cross-country skiers who were inducted last year (Shirley posthumously). They competed at four Olympics and combined to win a total of 79 medals at national championships.

Harry Manson—A stellar soccer player, who was better known by his First Nations name of Xul-Si-Malt, Manson was inducted into the hall last year. He was regarded as one of the country’s elite soccer players in the late 1800s and early 1900s. He captained the Nanaimo Indian Wanderers in B.C.

He was one of the country’s elite box lacrosse players during the 1930s and ‘40s. He won seven Ontario Lacrosse Association scoring titles and the Mann Cup (Canadian senior men’s title) twice; once with the Hamilton Tigers and Mimico-Brampton Combines.

Joe Keeper—A runner from Manitoba’s Norway House Cree Nation, Keeper competed at the 1912 Stockholm Olympics. He participated in both the men’s 5000-metre and 10,000-metre races, finishing fourth in the latter. Keeper, who died in 1971, was inducted posthumously into the hall last year.