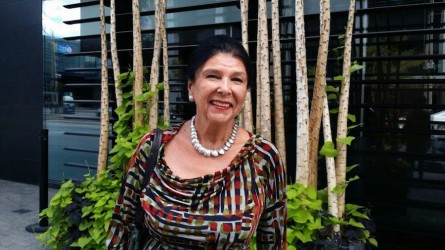 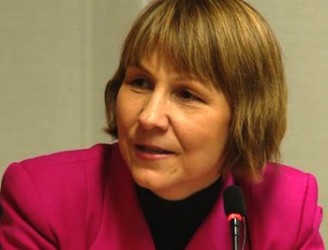 Alanis Obomsawin’s latest film is a condemnation of Canada’s discrimination against its most vulnerable citizens – First Nations children.

In 2007, the Child and Family Caring Society of Canada and the Assembly of First Nations filed a landmark discrimination complaint against the federal government. They argued that child and family welfare services provided to First Nations children on reserves were underfunded and inferior to services offered to other Canadian children. The film chronicles the events following the filing of the human rights complaint

Running at two-hours-and-42 minutes, “We Can’t Make the Same Mistake Twice”, is Obomsawin’s longest film.  The film premiered at the Toronto International Film Festival on Sept. 13.

The title harkens back to the Indian residential schools era when, pursuant to government policies, thousands of children were removed from their families and communities and placed in boarding schools run by churches.

The Truth and Reconciliation Commission documented the abuse and neglect suffered by these children at the hands of their caregivers. The TRC called it cultural genocide.

“I feel that people are ready to watch this,” said Obomsawin in an interview her new film. “I didn’t want to rush things. I want the story to be clear about what people are going through and who the real people are and that takes time. If ever Canadians were ready, this is the time.

“Because of all the news and all the stuff that’s going on, people are so appalled about what they’re hearing about the missing Indigenous women and the residential schools story. It’s going to help educate and, for me, that’s the main thing. It’s going to help Canadians really know what these stories are and to understand because people say, ‘ah, Indians again and they want more money; we’re spending all this money.’ That’s the kind of thing we’ve had for so long.”

The film documents that at every step of the way of the human rights tribunal on child welfare the federal government, instead of admitting to Canada’s blatant discriminatory practices, sought to put a stop to the process through appeals and failing to provide documents. They spent millions of dollars fighting the case.

Canada’s government also engaged in dirty tactics against freedom and the right to privacy. Cindy Blackstock, the hero at the centre of the battle against injustice, learns that both the departments of Justice and Aboriginal Affairs spied on her, invading her privacy by looking at her Facebook page and other social media accounts, and monitoring her movements.

Blackstock is the executive director of the Child and Family Caring Society and is recognized internationally as a fierce and committed advocate for First Nations children.

The spying by the federal government was an effort to discredit Blackstock and to take her dignity, said Obomsawin. It didn’t work. Blackstock took action and the Human Rights tribunal later ordered the department of Aboriginal Affairs to pay her $20,000 for pain and suffering, money that Blackstock donated to children’s charities.

“Cindy is such an incredible person,” said Obomsawin. Getting justice for First Nations children is a mission for her, she said. “She’s not going to stop until things are the way she feels they should be. Sometimes she was questioned or put down, they were trying to take away her dignity, telling her she didn’t know what she was talking about. I remember one day, I felt really bad for her and when I saw her the next day, I told her I was worried about her. She said to me, ‘I have to tell you that sometimes I feel very bad. But if they want to treat me like that, I’m not going to go to their level. That’s their way. I’m not there and I’ll never be there’.”

Obomsawin was able to gain access to film the hearings, both the tribunal and the appeal court hearings.

“I sat there the whole time to hear the witnesses and to see what was going on,” she said. “It was hard to watch but for me. I felt it was a gift also because I felt our people were really heard and there was dignity and respect towards our people.”

It was very different, Obomsawin said, from what she saw in the courtrooms in the 1960s when she started to travel and organize “where there was no respect and our people had no voice. From what I have watched over the years, it’s very important for me to see the difference. I think we’ve come a long way. There’s still a lot of work to do, but it’s a very different time.” The change that she’s seen over her lifetime is what keeps her hopeful.

The film constantly reminds the viewer that this is about the children. Every day, the courtrooms were packed with children.

“Cindy has created such a movement with children and teachers,” Obomsawin said. “The children are taking responsibility. They want to make change. They don’t like to know that other children are not treated properly…That kind of spirit is just so strong and it’s so beautiful.”

In between hearing from Indigenous social workers, who place the children’s interests above all else, and from non-Indigenous bureaucrats whose priority seems to be saving money, Obomsawin takes us into the lives of children and families adversely affected by the discriminatory practices.

This is done with tremendous compassion. One looks at the bonds between parents and child and is left to wonder why anyone would think of removing a child to an institution instead of providing help at home for the parents to care for their children.

In January of this year, nine years after the complaint was filed, the Human Rights tribunal released its decision. It ruled that the federal government does indeed discriminate against on-reserve First Nations children by failing to provide the same level of child welfare services that exist off-reserve.

To date, the government has done nothing to remedy the situation. On Sept. 16, the tribunal had to issue a second compliance order to attempt to force the government to take immediate action.

Obomsawin is optimistic that the film will change Canadians’ perceptions of Indigenous people by telling them the real story. As for the bureaucrats, “they don’t seem to know the profound story of anything,” she said.

Still, she’s willing to concede that there are many in the system who want to make changes.

“I don’t think we’re going to win everything overnight,” she said, “but I think the government is going to change their ways of dealing with us, not forcing us to do things the way they feel is right, which has brought nothing but problems.”

“We Can’t Make the Same Mistake Twice” will be shown at film festivals across the country and is slated for theatrical release.