Neither polite nor gentle: Exhibit will shake foundations of colonialism 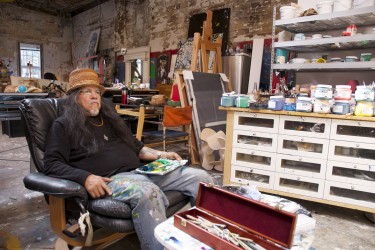 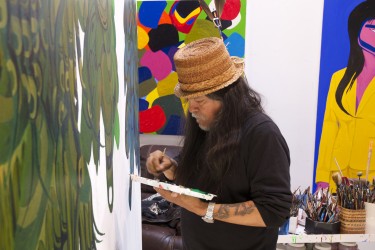 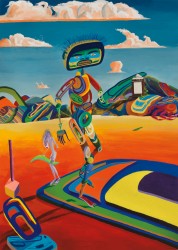 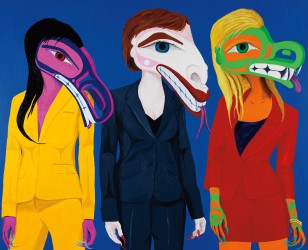 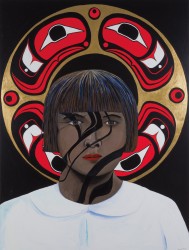 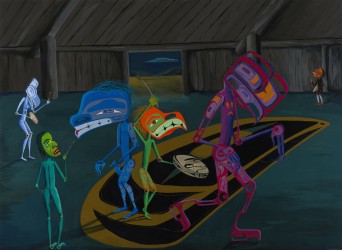 “We’re not hiding our culture anymore… We’re sharing it, we’re celebrating it, we’re honoring it… Racism is ‘I don’t understand your religious beliefs; then I fear you, and hate the color of your skin.”

The voice of Salish artist Lawrence Paul Yuxweluptun, whose lifetime of work will be displayed at the Museum of Anthropology at the University of British Columbia in May, echoes the sentiment of many.

“So I’ve made this painting to show people that I’m going to pray as a Native person, in a longhouse on sacred ground, and I’m going to be the ‘noble savage’… that person that worships everything in life, and looks after the world, and cares for everything,” he said.

He refers to the painting called Spirit Dancer Dances Around the Fire, which is as politically-charged as most of his other work, only much, much larger—18 feet by 11 feet to be exact.

It’s been 20-years since Yuxweluptun’s last major solo exhibition in Canada, so the show called Lawrence Paul Yuxweluptun: Unceded Territories, which runs from May 10 to Oct. 16, is important for him.

The past 30-years of Yuxweluptun’s work will be on display, though he’s been creating art since he was a child, dating back to his days carving totem poles in Indian residential school, he said.

“Most of the work done for this show was done prior to Native people being included in the [Charter] of rights. That was a very difficult time in history, because there was no accountability… I live in Vancouver, I’m Salish, and my mother’s Okanagan. So I am a Native, but I’m a modernist… and modernists have to deal with everything,” he said.

By “deal with everything” Yuxweluptun means he uses his art not only as a way to speak about issues that matter to him, but to work through them. His art is not based on traditional Indigenous styles, but he sometimes uses traditional techniques or images while incorporating his own methods. And he is particularly passionate about environmental issues, and issues facing Indigenous people.

“Sometimes I go back and forth in history because I have to record stuff. I painted a painting called “Reservation Cutoff Lands. If somebody says ‘Well, what’s that about?’ I say, ‘Well, reservation cut off lands is when the government had reservations for Indians here in this province, they came back and said ‘they’re too big and we’re going to cut your land off and make them smaller,’” he said.

He’s arranged the images in this painting in such a way that the person who is looking at it has the feeling of standing in front of a boundary they are not allowed to cross. The landscape is drawn like an ovoid—a shape between an oval and a rectangle, used in traditional Northwest Coast First Nations art, such as Haida, Tlingit, and Tsimshian—and a line is “cutting” right through it.

Yuxweluptun, having attended residential school himself, is also not shy to bring up this topic, and he’ll be using a never before seen installation at the upcoming MOA exhibit to do it.

“It’s ‘Residential School Dirty Laundry.’ And it’s an installation of little boy’s and girl’s underwear laying on the floor, in the shape of a cross for all the kids that were raped or violated,” he said, adding that while it may trigger some people emotionally—including survivors—he believes they will understand this is a story “that has to be told.”

Karen Duffek is a curator for the Museum of Anthroplogy. She’s been working alongside Tania Willard to make the exhibit happen, and the two felt Yuxweluptun’s work was timely with regard to B.C.’s political climate specifically.

“We called his exhibit ‘Unceded Territory’ because we are located on unceded traditional Aboriginal territory here in Vancouver and much of B.C. But we’re also talking about his freedom to say and do and paint what he wishes… He’s always asserting his own freedom against colonial legislation like the Indian Act,” said Duffek.

And Yuxweluptun’s work is now even more relevant because the BC government and its people have been involved in much conflict around the construction of LNG facilities, dams and oil pipelines through the province—and through First Nations territories.

“The audience who will be coming will have quite the awareness about the issues he’s addressing… We are becoming very familiar with debates around oil pipelines, LNG, and fracking. And people have heard of Idle No More, and they’ve experienced the Truth and Reconciliation Commission,” she said.

As for Duffek’s own favorite piece from Yukweluptun, it’s a painting called “The Intellect”, which shows an Aboriginal person “pacing the limits” of a reserve. For her, it epitomizes his style, and demonstrates his feelings about colonization, including even the colonization of a landscape.

“It’ll be really interesting to see how people respond to the work. I think they’ll be very drawn to it for the art, but also the issues. He doesn’t worry about being polite, or gentle,” she said.