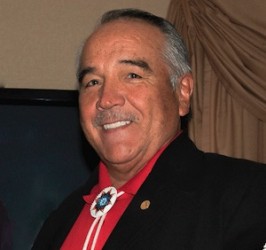 “I’m going to be going to the United Nations saying what I want to say.” – National Chief Dwight Dorey of the Congress of Aboriginal Peoples

His decision to speak at the United Nations this week–and not take money from the federal government to cover the cost of his ticket to New York–finally netted him a meeting with Indigenous Affairs Minister Carolyn Bennett about implementation of the Daniels’ decision. National Chief Dwight Dorey of the Congress of Aboriginal Peoples is convinced of that.

“Their office called me,” said Dorey. “There had been some attempts to try and get a meeting and she never seemed to be available.”

Dorey said the federal government offered to pay his way to the U.N., but he was concerned that accepting that offer would limit his ability to speak his mind.

He says when federal funds paid for him to attend the climate change conference in Paris late last year, he had to sign a waiver agreeing not to criticize the government.

“I’m going to be going to the United Nations (now) saying what I want to say,” said Dorey. “We’ve been discriminated against since the Daniels’ case. Nothing’s happening since the Daniels decision. I’ve not even had a sit-down meeting to discuss the potential impacts and where we go from here.”

Dorey says speaking critically about the government at the U.N. will not hamper any future discussions with Bennett.

“I have nothing to lose,” he said. “There’s no process, there’s no dialogue. That concerns me.”

Last month the Supreme Court of Canada ruled in the Daniels’ case that Métis and non-status Indians were a federal responsibility and would no longer be in a “jurisdictional wasteland with significant and obvious disadvantaging consequences.”

Dorey was expecting the Trudeau government to start discussions on delivering services and supports to both Métis and non-status Indians similar to what is already being offered to First Nations and Inuit peoples.

Instead, Dorey says, there has been nothing and he’s not sure whether he’s being frozen out of the discussions.

In March, Prime Minister Justin Trudeau and the premiers met with Indigenous leaders in Vancouver to discuss climate change. Dorey was not invited, although his counterparts from the Assembly of First Nations, Métis National Council and Inuit Tapiriit Kanatami were.

But as the only national body that represents non-status Indians, CAP has leverage, said Dorey.

“The Supreme Court in Daniels clearly specified that non-status are a distinct group,” said Dorey. “The court indicated that we are a right-based people … and we had the right to be consulted and negotiated.”

Dorey said CAP also speaks for the Métis people, noting that many of CAP’s Métis members fall under the Powley definition of Métis.

“The federal government has already agreed to a nation-to-nation basis with the Métis Nation, so we’re not concerned about that,” said Chartier.

He says he is also not concerned about the lack of movement on the part of the federal government on the Daniels’ decision. While MNC has not specifically spoken to Bennett on the decision, Chartier says there have been “general discussions.” He anticipates meetings will come by late summer when the government has analyzed the Daniels decision and has studied the recommendations of the McIsaac report.

Tom McIsaac was appointed by the Harper government to meet with the MNC, other Indigenous organizations, and provincial and territorial governments to outline a process in moving forward on discussions on Section 35 Métis rights. That report is expected in the next several weeks.

Dorey says both CAP and MNC can speak for Métis rights.

Dorey says he will be sending a letter to the leaders of MNC, AFN and ITK suggesting they meet and talk about the implications of the Daniels’ decision and perhaps develop a process to move forward.

But for now, Dorey is concentrating on his June 2 meeting with Bennett. He expects that meeting to include only government officials and members of CAP.

Indigenous and Northern Affairs Canada would offer no comments on how the department is moving forward on the Daniels’ decision.