Mom says First Nations culture fine, but don’t give my kids any religion 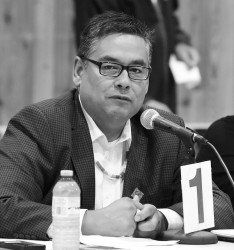 Assembly of First Nations B.C. Regional Chief Shane Gottfriedson suggests it’s time for parties to step back and take a deep breath. He was speaking about a lawsuit that has been filed in the BC Supreme Court.

“It’s really being blown out of proportion,” he said.

The lawsuit raises the issue of how schools should be allowed to teach and promote Indigenous culture in the classroom.

Port Alberni mother Candice Servatius has filed a petition alleging that her two children were required to take part, on two occasions, in First Nations religious practices at John Howitt Elementary School, in contravention of both the B.C. Schools Act and the Charter of Rights provisions respecting religious neutrality.

According to the complaint, the first incident occurred on Sept. 16, 2015. Two days previous, School District 70 district principal Stacey Manson sent home a notice that students were invited to participate in a traditional Nuu-chah-nulth cleansing ceremony, and directed any inquiries to an SD 70 staff member.

In her petition, Servatius alleged that her daughter was told “it would be rude” not to participate. The parent immediately complained to the school district and was assured that no further religious practices would take place.

Then, on Jan. 7, 2016, hoop dancer ­­Teddy Anderson performed at the school. In a letter to SD 70 Superintendent Greg Smyth, Servatius wrote:

“The children went on to tell me that the hoop dancing was interesting and impressive but they felt uncomfortable with the [accompanying] prayer.

The children concluded that: “He was praying to a god but not the same god we pray to.”

Servatius emphasized that her children enjoy learning about Indigenous culture and tradition. Her objection is against their being required to participate in spiritual/religious activities in any form, as spelled out in the School Act and Charter.

Through a family member, Servatius declined to comment to Windspeaker.

For his part, Superintendent Smyth said while he stands by the District’s commitment to teach Nuu-chah-nulth culture in the classroom, he could not comment directly on the case.

“We are aware of the petition and we are reviewing it with our lawyers to respond in court,” he said.

In her petition, Servatius notes that Smyth had categorized the prayers and ceremonies as “cultural,” rather than “religious” practices. Smyth was asked if casting the ceremonies in those terms tended to minimize their spiritual significance.

“I will not comment on the particulars in the complaint,” he responded.

“I feel that it’s unfortunate it has been taken to the level it’s at.”

Gottfriedson maintained there is a difference between organized, codified religion and the spiritual practices of Indigenous peoples.

“When you look at our culture, it’s not a ‘religion,’ and to characterize it as such – because it may include a ceremony or prayer – is not a position that the BCAFN can support,” he said.

“And this movement has been growing in B.C., to support and foster positive relationships between Indigenous and non-Indigenous students, with the hope that, one day, we can build a stronger and more supportive relationship. With the hope that, by sharing our cultures and our traditions, it will lead to the elimination of racism… and bullying, and animosity between different cultural groups.”

When reports of the court case hit the newswires, U.S.-born Choctaw member Keith Hunter, who lives in Port Alberni with his wife, a member of Tseshaht First Nation, raised some concerns on social media.

Speaking as “a pitiful human being that follows the pathway of our Sundance,” Hunter said it is concerning to see traditional medicines and ceremonies tied up in the courts as the result of mishandling by teachers and the school board.

Hunter said he felt that SD 70 failed to address the concerns raised by the Servatius family.

“I hope and pray that School District 70 and the ones involved stop harming our medicines and ceremonies by the way this was handled. And I hope and pray this young person and family is able to overcome the disrespect they were shown,” he concluded.

But Gottfriedson said initiatives such as those taken by SD 70 should be welcomed in the spirit of reconciliation, rather than being met with anger and outrage – not to mention court actions citing infringements on Charter freedoms.

“Our position is that the BCAFN supports SD 70’s position by including the Nuu-chah-nulth culture and traditions, and that they do not violate the Schools Act or the Constitution, or what a reasonable person could expect of a public school operating on the traditional territory of the Nuu-chah-nulth people.”

Gottfriedson said SD 70 has accepted a mandate from the province to include authentic Aboriginal content in their curriculum.

“Truth and Reconciliation calls for action, as does the United Nations Declaration of the Rights. We applaud School District 70 for their efforts to include Nuu-chah-nulth culture in their curriculum, and support them as they move forward.”