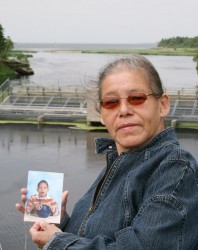 Like any 16 year old, Jeremy Beadle loves music and going for a cruise. But, his mom, Maurina worries that if he’s institutionalized, Jeremy could go into a vegetative state.

Maurina says, “Jeremy would get less care away from his family and community, and could become self abusive. He would become just like a vegetable.”

Jeremy has hydrocephalus, cerebral palsy, autism and spinal curvature. Hydrocephalus is a medical condition in which there is an abnormal amount of water on the brain. He recently had a permanent shunt replaced in the lumbar region of the spine.

Maurina has been caring for Jeremy at home in Pictou Landing First Nation, Nova Scotia all his life. But things changed last year when extra care was called when Maurina ended up in a wheelchair after she suffered a stroke.

Health care workers were sent to the home to help the single mom, who now uses a cane, care for Jeremy. She needed help to bathe, dress and feed the youngest of her two sons.

Since then, the First Nation has been paying extra for the care workers and is starting to become tapped for money. Using Jordan’s Principle as the foundation of a complaint, the band is taking the federal government to court over lack of timely and adequate care funding for the struggling family.

Right after Maurina’s stroke, said Phillipa Pictou, health director at Pictou Landing, “I put them in for more services, in the spirit of Jordan’s Principle, because they needed the care right then. I wasn’t about to argue over which government was going to pay for it.”

Jordan’s Principle is a child-first standard adopted in the House of Commons in late 2007. It was named in honor of Jordan River Anderson of Norway House Cree Nation in Manitoba. The five-year-old boy died in hospital after spending two unnecessary years there while the provincial and federal governments argued over who would pay the bill for his care on reserve.

The principle calls on the first government of contact to pay the bill to look after the child, and then sort out which government is responsible for payments later.
The principle has been in place for about four years now, and not only does it take time to access the Jordan’s Principle funding of $11 million, it also seems very difficult.

Pictou says, “At that point, I was trying to figure out how to access the money through Jordan’s Principle... it’s taken us a whole year... they [governement] didn’t want to provide us with very much information in the beginning, and they still don’t really.”

The way it works, Pictou said, is that they needed to be turned down for ‘normative’ care, which means the allowable funding off-reserve. Pictou said they needed the province to do the assessment. But, there was another wrench thrown in the works.

“We were told, Continuing Care, which would normally do the assessment, is not allowed to come on the reserve at all, even though the reserve doesn’t have access to that kind of assessment,” said Pictou.

The band ended up obtaining Ministerial Health approval to be able to have the assessment completed, without taking on any extra financial burden.

Once the assessment was complete, Pictou said case conferences were scheduled between the First Nation, Aboriginal and Northern Affairs Canada, First Nations and Inuit Health Branch, and provincial services, such as Continuing Care, and the local health unit, along with Jeremy’s mom.

Pictou was hoping they could figure out how to access Jordan’s Principle, and after five such conferences, she said, “they came back with a cap of $2,200 for services for any one family, and, after that, the child would have to be put into an institution.”

Pictou learned that an institution would cost about $350 a day, which works out to just over $10,000 a month. The community had been trying to get at least $4,000 a month above the cap for the extra services for Jeremy and his mom.

“I did not think that seemed right, and if that happened off reserve, that wouldn’t have been accepted.”

After investigating the issue, Pictou came across a court case where a woman won her case against the province to obtain more than the cap, plus Pictou also found policies in the Community Services policy book.

“They have a whole section on extraordinary and exceptional circumstances, and Maurina and Jeremy meet all of them.”

“It’s right in the provincial policy that if you have any one of those situations, that your case manager could approve either long- or short-term care above the $2,200 cap.” said Pictou. The band was also told it wasn’t allowed to access other funding, unless they wanted to re-do the entire funding agreement with Aboriginal Affairs Canada. A new agreement would have affected all of the social funding for the community.

Pictou was persistant, and brought the matter to tribal council, which was then sent to the Assembly of First Nations and the Child and Family Caring Society for support. Pictou Landing now has the backing of both organizations.

Cindy Blackstock, executive director of the First Nations Child and Family Caring Society, says the issue is definitely a human rights issue. Since First Nation citizens on reserve have recently been brought under the Human Rights Act, Blackstock said, “We’re hopeful it will have an impact on this case. It’s fundamental that First Nations people be recognized fully as peoples under the law and have access to human rights.”

In an email, Aboriginal Affairs and Northern Development spokesperson Genevieve Guibert said it wasn’t an appropriate time for the department to comment since the matter is before the courts. Aboriginal Affairs also provided a short brief on Jordan’s Principle.

Photo caption: Maurina Beadle holds a picture of her son Jeremy. She wants her disabled son to stay with her on reserve in her home, but Aboriginal Affairs says it doesn’t warrant the expense, and says the funding cap for care would be exceeded, so the option now is to see the boy institutionalized.