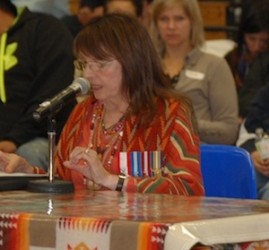 The commissioners of the National Inquiry into Missing and Murdered Indigenous Women and Girls have committed to examining police behavior.

In a statement issued Nov. 18, the commission said, “The situation in Val-d'Or is exactly the type of situation that the national inquiry will look at. Policing is a crucial government service that certainly falls under the inquiry's mandate.”

When the terms of reference were released in August, they did not specifically include police interaction with Indigenous women and their families.

“The institute was part of a number of groups that was very unhappy about that,” said Muriel Stanley Venne, president for Institute for the Advancement of Aboriginal Women in Edmonton. “I don’t see how you can do a proper investigation without the input of the police’s actions anywhere in Canada.”

Stanley Venne is pleased that the examination of police behaviour is no longer a grey area.

“I’m absolutely supportive of their initiative (to include policing) because it’s part of the entire scene of the difficulties that Indigenous women have in being believed,” said Stanley Venne.

Hutchinson said that the commission clarifying that point is only coincidental following the decision by Crown persecutors not to charge six Quebec provincial police officers following an investigation into the alleged abuse of Indigenous women in Val-d'Or.

“We were asked to make a statement specifically on Val d’Or, but that doesn’t mean we came up with the idea that policing fell under our mandate at that particular time,” he said. “One doesn’t follow the other.”

What happened in Val d’Or is not unique, said Stanley Venne. Police are mistreating Indigenous women right across the country.

Last week in Edmonton, a city police officer pleaded guilty to one charge of neglect of duty at a disciplinary hearing following an incident in April 2014, when he wrongfully arrested a First Nations woman for impaired driving. Arlene Sams, who at the time was going through a traumatic experience, has requested that arresting officer Const. David Olsson participate with her in a reconciliation process.

“It’s a real interesting case right here and it relates to the statements that were made by the Indigenous women in Quebec because they’re not being believed,” said Stanley Venne.

“The vital part of the whole issue is the relationship with the police,” she said.

The allegations that came forward in Val d’Or stemmed from a discussion at the Val-d'Or Native Friendship Centre. Women claimed that they had suffered abuse at the hands of on-duty Quebec police officers decades ago, having been physically or sexually abused, or dropped off at the outskirts of a community and forced to walk back.

The friendship centre, along with Ghislain Picard, chief of the Assembly of First Nations of Quebec and Labrador, have renewed their calls for the Quebec government to set up an independent commission to examine relations between police and First Nations.