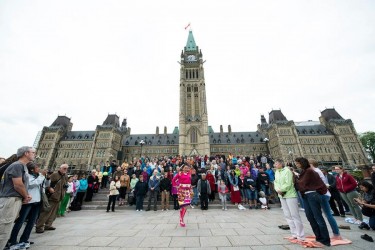 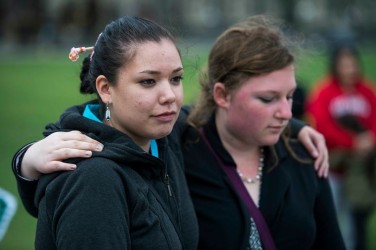 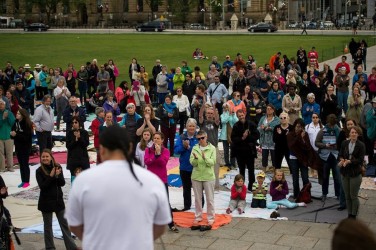 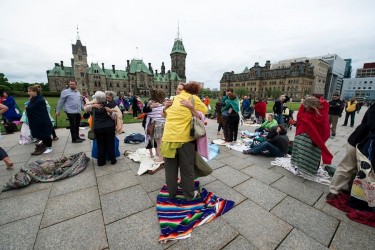 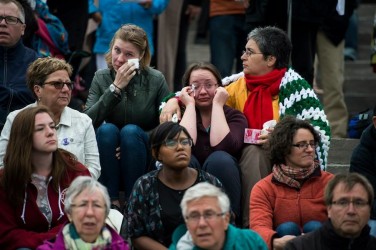 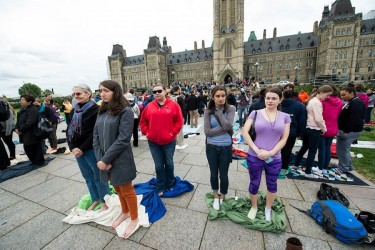 In honour of the one-year anniversary (June 2) of the Truth and Reconciliation Commission’s release of its calls to action report, a group called Kairos Canada is planning special  events, called the Blanket Exercise, across the country.

Kairos will bring the exercise, a favorite, quick and easy method for teaching material about colonialism in Canada, to the lawns of legislature buildings starting in Charlottetown May 28, at Toronto’s Queens Park on May 30, in Ottawa May 31, in Regina on June 1, in Victoria June 2, and in Winnipeg and Whitehorse on June 4. Other cities are exploring possible dates.

The blanket exercise has been around since 1996. It was created after the Royal Commission on Aboriginal Peoples report was “quickly shelved,” said Katy Quinn, Indigenous Rights Coordinator for Kairos.
In practice, when the blanket exercise starts out, all the participants are standing on the blankets together, and a facilitator rolls through a script referencing colonial legislation like the Indian Act, Indian residential schools, and the 60’s Scoop. All of this legislation served to remove Aboriginal people from their territories, or their homes and families.

As the script moves along, participants are asked to leave the blankets, and the blanketed space shrinks.

“The blankets represent all of Turtle Island, before European contact. They gradually get folded up smaller and smaller, representing First Nations reserves, Metis settlements, and Inuit communities. Most facilitators will take the blanket away when it’s empty, and some will just fold it up really small,” said Quinn.

“But there are times where a blanket gets unfolded a bit because of an Indigenous leader bringing about positive change,” she added.
Under their new Winds of Change campaign, Kairos is concentrating on one particular call to action—number 62—which pushes for curriculum concerning the Indian Act and colonial policies to be included in Kindergarten to Grade 12 classrooms across the country.

“With the TRC’s calls to action, the first part of 62 is about the curriculum change. We have a big push on for that one, and we have people signing petitions in almost every province and territory,” said Quinn.

“We want to raise awareness of that call to action…. We want people to be exposed to that action. And having these mass blanket exercises on the lawns of the legislature buildings will help raise awareness about the kind of content we want to see in the schools,” she said.

The blanket exercise is normally done with a group of 20 to 40 school children, teachers, or employees of requesting organizations. For this occasion, however, Quinn and the Kairos team are tailoring the activity to participating audiences of about 300.

The act of holding the gatherings on the lawns of public government buildings, in nearly every capital city in Canada, will amplify the Kairos message, while holding it as close to June 2 as possible, said Quinn.

“People seem ready to have these different conversations now.  They’re hungry for this knowledge and history that’s been kept from us... But it’s not necessarily about the numbers. We hope that it will capture people’s imaginations, so people who have never heard of the blanket exercise will want to hold one in their community,” she said.
Gabrielle Fayant is an Indigenous youth leader in Canada. She works with an organization called the Assembly of Seven Generations, and she is part of the reason Kairos has decided to go so big with their blanket exercise this year.

“Last year during one program called ‘Reach Up North,’ we brought together six young people. The blanket exercise was part of the curriculum, and for some of the youth it was the first time they heard that information. They were upset they hadn’t been taught it in school,” said Fayant.

“The interns decided then they wanted to bring it to as many people as possible… and do it on Parliament Hill,” she said.

Fayant has been using the blanket exercise in her work herself for a few years, but she was impressed by the effect it had on such a large audience. Four hundred people turned out for the demonstration last year, and since then she has taken on a lead role in organizing the upcoming mass blanket exercises for Kairos this year.

“That conversation is really important to me. I’m finding that many non-Indigenous Canadians are trying to create reconciliation without understanding the full story. These mass blanket exercises are the quickest way I see for them to understand the story,” said Fayant.

“It’s heavy. But it’s also the truth. And it’s a truth that needs to come out in order for us in our country to move forward,” she said.

Exact dates and locations for the blanket exercises can be found on the Kairos webpage http://www.kairoscanada.org/what-we-do/indigenous-rights/windsofchange-m...
Kairos is an ecumenical movement for ecological justice and human rights, bringing together inter-church coalitions, and administered by the United Church of Canada.