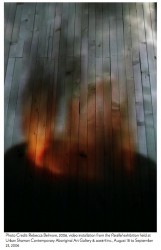 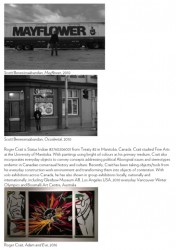 The Urban Shaman Contemporary Aboriginal Art Gallery in Winnipeg is celebrating its 20th year in business.

In honor of the occasion, they’ll be holding a special exhibit beginning May 6 and ending June 30, which opens with a reception party, followed by a two-day symposium with artist-led discussion panels and a gala ceremony.

Daina Warren, the gallery director, tailored the exhibit to commemorate artists who have been involved with the gallery since its earliest days.

The title is “The Fire Throws Sparks” and consists of 11 people in a group exhibition. “All of the artists have been through the gallery at some point… And I wanted to talk about the ‘spark’ of inspiration or the ‘spark’ of an idea, so chose people’s works that were about a time in their career where they were just getting recognized,” she said.

While Warren has only been at the gallery for four-and-a-half of its 20-years, she is familiar with its rich history. March marked the official anniversary date, because it was the actual month the incorporation papers were signed in 1996, she said, and the gallery’s name, Urban Shaman, has been used from the start.

“One thing Lita and Leah (Fontaine) said, was it was more of Louis Ogemah’s baby… I remember them saying he was looking at some sort of information about Norval Morriseau the painter, and (Morriseau) said he referred to himself as an Urban Shaman because he was very linked to spirituality, using art as a way to channel that,” said Warren.

“Louis said he really liked that. They went through a lot of names but that’s the one they ended up settling on,” she said.

The Fontaines are twin sisters who were involved with the gallery as it was just opening back then. Lita has had art in the gallery since, and will have some of her work in the upcoming exhibit. Other artists who will be included are KC Adams, Scott Benesiinaabandan, Roger Crait, Kevin McKenzie, Peter Morin, Nadia Myre, Melissa Wastasecoot, Linus Woods, and Rebecca Belmore.

Belmore’s piece will be the only sculpture in the show, while the rest will be paintings, photographs, or posters, said Warren.

Warren has even commissioned the artists to create their own version of what they think an “Urban Shaman” would look like. The pieces won’t be in the exhibit, but they’ll be auctioned off at the “From Light into Night Masquerade Gala” held on the evening of May 7.

A symposium celebrating 20 years of contemporary Indigenous artistic expression will be held May 6 and 7 and is free of charge for visitors, as is the gallery exhibit. Funds raised from the auctioned-off “shaman” pieces will go straight to the gallery to keep it in operation.

“Lita’s and Roger’s are really colorful,” she said. “Lita has done almost like a tipi shape for her urban shaman. She uses a lot of rhinestones, and sparkly things… and bright beautiful colors. Roger has done a kind of Adam and Eve portrait from Christianity. There’s a floating skull in the middle. It’s a really, unique lively piece,” she said.

Lita Fontaine vividly remembers the day the incorporation papers were signed for the gallery back in 1996. The papers were actually signed at her house, while the group of founding members were standing around a fire pit in her backyard.

Then she was lucky enough to be the first artist to have her work on display at the freshly formed gallery.

“I was the first artist with a full exhibition as a professional. It was the same night Urban Shaman opened. And it was exciting for me as an aspiring artist at the time… a dream come true, doing something for my community, by my community,” she said.

She was asked by Warren to “resurrect” one specific piece for the exhibit, too. It’s one of her creations from the 90’s called A Woman’s Drum. It holds value in both an artistic, and a historical sense because it recognizes a time when Indigenous women were “taking back of the drum”—an important move because at that time, “Indigenous feminism” didn’t exist, she said.

“As a powwow dancer at the time, I wanted to go around and sing by or sit by the drum, but there were issues that women weren’t allowed to sit with the men at the drum. It’s different now, women have reclaimed that space,” said Fontaine.

“When I made it, I put that speaker in there so you’ll hear that ‘thump, thump,’ and around it I put a woman’s pair of breasts, because breasts are very life-giving… I was reclaiming that space as an Indigenous woman, that I have every right to be at and sit at the drum,” she said.

For more information go to the Urban Shaman website at:
http://www.urbanshaman.org/