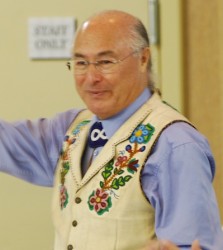 The only Métis body that enjoys a nation-to-nation relationship with the federal and provincial governments is the Métis National Council, and as such, in wake of the Daniels’ decision, it is the MNC that will be conducting negotiations with the other two levels of government on behalf of the Métis people, says MNC President Clement Chartier.

“We’ve made this point, and I believe we’ve won this point, with the provincial and federal governments that we’re not an NAO, national Aboriginal organization, we’re a government, and so on that basis we will be moving forward,” Chartier insisted.

“It matters not to us what they do. And there’s no balancing (jurisdictions) there.”
~ Métis National Council President Clement Chartier on Congress of Aboriginal Peoples

On Thursday April 14, the Supreme Court of Canada ruled that Métis and non-status Indians fall under federal jurisdiction and said both groups had the right to be consulted and to negotiate with the federal and provincial governments.

Chartier said the federal government has already proven they view the MNC as the voice of the Métis people pointing to the first ministers’ meeting on climate change and the environment in March, where the MNC was invited along with the Assembly of First Nations and the Inuit Tapiriit Kanatami.

As far as Chartier is concerned, there is no jurisdictional issue with the Congress of Aboriginal Peoples, which claims to represents off-reserve status and non-status Indians, Métis and southern Inuit Aboriginal peoples.

“(The government will) continue to have the advocacy bodies and organizations and (CAP will) continue to press for whatever rights it is that they’re pressing for, programs or services. It matters not to us what they do. And there’s no balancing (jurisdictions) there,” said Chartier.

“We will have to have some dialogue with the federal government to look at a process and through that process, we’ll start cataloguing what it means, what our priorities and interests (are) and what the government’s might be as well,” said Dorey.

Since Dorey took over as CAP national chief last September, he has been actively recruiting CAP affiliates in western Canada.

Presently CAP has affiliates in Ontario, Saskatchewan, and Manitoba, provinces which also have Métis Nation governments.

The Métis Nation of Saskatchewan has been embroiled in in-fighting for a number of years, which in 2014 resulted in the federal government suspending MN-S’s funding. Earlier this year the government brought in third-party management, which will remain in place until MN-S holds an election.

Alberta has a Métis Nation government as well as a Métis Settlement General Council. The MSGC was created by provincial legislation. Alberta is the only province with Métis settlements, with all eight located in the northern part of the province. The MSGC recently negotiated a consultation policy for resource development with the provincial government.

British Columbia has only a Métis Nation government.

CAP also has affiliates in Newfoundland-Labrador, Nova Scotia, Prince Edward Island, New Brunswick and Quebec. There are no Métis Nation governments in these provinces.

Jason Madden, legal counsel for MNC, anticipates representation could be divided from Ontario west, where MNC, along with the provincial Métis Nation governments, would represent the Métis people.

CAP and MNC differ on the definition of Métis. CAP views Métis people as those of “mixed Aboriginal ancestry,” while MNC uses the Powley definition, which sets three criteria: identify as a Métis person; be a member of a present-day Métis community; and, have ties to a historic Métis community.

In its Daniels’ ruling, the Supreme Court did not define Métis, except to say Métis were included in the term “Indian” in Sect. 91(24) of the Constitution, which provides the federal government with exclusive authority over Indians and lands reserved for Indians.

Madden says the Daniels’ ruling lets communities define themselves accurately and not in a way that will allow them to assert their rights.
“What this really says, is that’s not necessary. On a case by case basis, we can have these mixed ancestry communities and then we can decide, one, are they Métis, or two, are they non-status Indians. So they can be potentially recognized for what they really are as opposed to trying to reconfigure or structure themselves in a way that really doesn’t align with who they are,” he said.

For Métis to have rights as allocated in Sect. 35(1) of the Constitution, they must fit the Powley definition.