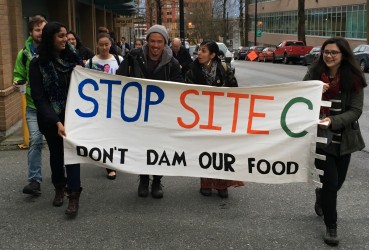 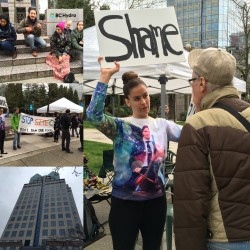 Treaty 8 First Nations are asking, ‘What is wrong with this picture?’
The Liberal Government of Canada has declared full and unqualified support for the United Nations Declaration on the Rights of Indigenous Peoples (UNDRIP), while at the same time allowing the contentious Site C Hydro project to proceed.

On May 10, Indigenous and Northern Affairs Minister Carolyn Bennett stood before the United Nations Assembly to declare that Canada had renounced the “objector” status imposed by the previous government, and was now a “full supporter of the Declaration, without qualification,” adding:

“Adopting and implementing the Declaration means that we will be breathing life into Section 35 of Canada's Constitution, which provides a full box of rights for Indigenous Peoples."

Bennett’s “sunny ways” pronouncement drew an immediate challenge from the leaders of Prophet River and West Moberly First Nations. While welcoming the shift of policy from the Harper Government’s opposition to the Declaration, they cautioned that the Peace River Valley is now “Ground Zero for meaningfully implementing UNDRIP and addressing impacts to First Nations rights.”

“Talk is cheap. We got lip service from the Conservative Government,” Willson told Windspeaker. “We all hoped things would change when the Liberals came in. But so far, we haven’t even gotten lip service.
“They are hiding behind the Conservative decision to move forward. They have admitted that the assessment process was flawed, but they say their hands are tied.”

The Trudeau Government has taken a similar stance in relation to the contentious $15 billion arms sale to Saudi Arabia, despite the kingdom’s horrendous record of human rights violations, he noted.
At the same time, the provincial government continues to push energy development, both Hydro and liquefied natural gas.

“Christy Clark is running around trying to get rid of the energy,” he said. “Our position is, we will need the energy at some point, but not Site C.”

Unlike typical hydro projects, in which engineers build a dam across a narrow river canyon, the Site C project would require an extensive complex of earth fill saddle dams at various points to flood thousands of hectares of Treaty 8 traditional territory, much of which is Class 1 agricultural land.

“The destruction of the Peace River Valley will have a devastating impact on our peoples' ability to maintain our traditional mode of life and cultural identity,” Prophet River Chief Lynette Tsakoza said a May 10 statement.

Willson pointed out that the Site C footprint also contains dozens of active natural gas drilling sites and the underground wastewater disposal sites that accompany them. So far, no one can say with certainty what happens if all of this real estate is flooded.

“They don’t have anywhere near enough studies. They’ve only drilled three test wells,” he said. “Our consulting hydrologist, Dr. Gilles Wendling, has concluded that there is nowhere in the world that such a massive project would go ahead with such a poor [hydrological] database.”

Willson said it is now widely accepted that there is a glut of energy on the world market and that the Clark Government’s dream of prosperity based on LNG has been dashed. While never specifically stated, Site C has been held up as a source of clean energy to compress those millions of tonnes of (phantom) natural gas that would be pumped onto LNG ships for export.

“None of this makes any sense,” Willson said on the provincial posturing. “What makes sense is that they want to get re-elected on the promise of jobs. But they are pooping on us to win elsewhere.”

That does not explain the continued federal support for the project in the face of UNDRIP, however.

Article 8 of UNDRIP states, "Indigenous peoples and individuals have the right not to be subjected to forced assimilation or destruction of their culture."

“Right from the beginning, we told [Ottawa] they do not have free and full consent from us,” Willson said, adding that Site C was already contrary to earlier court decisions on First Nations rights.

“Site C can’t even pass the Sparrow Decision test on infringement,” he said.

In that landmark decision, the Supreme Court of Canada set the terms of how a government might (or might not) infringe upon the rights of Aboriginal people, based on some overarching national need.

“There is no need for that power,” Willson said. “We have always said we are not against energy development. But our position is that, if the LNG industry is developed, it should be powered by gas, not by Site C.”

Better yet, B.C. should develop its proven geothermal resources to fill the future demand for energy growth.

“We could build a world-class geothermal project, but we are still hanging our hat on hydro,” he said.

The Assembly of First Nations has welcomed the Trudeau Government’s support for UNDRIP. On May 10, AFN National Chief Perry Bellegarde said Canada is sending “an important message” to Indigenous peoples.

"Canada's commitment to work with First Nations to fully adopt and implement the Declaration is a crucial step in reconciliation, rebuilding the relationship and honouring the Truth and Reconciliation Commission's calls to action,” Bellegarde said in a prepared statement.

In the meantime, Treaty 8 members now face the prospect of their traditional territories, their cultural resources and sacred sites being slowly submerged under 19 metres of water in order to generate electricity that nobody really needs.

“I’ve been told by Elders that this is like watching an abuse taking place,” Willson said.