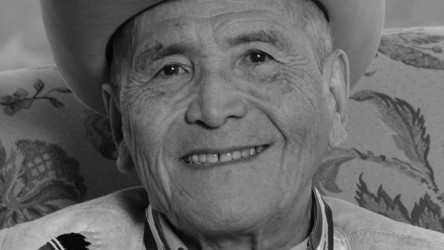 At a time when his people were so restricted by the Indian Act they were barely surviving, Len Marchand began his rise to the highest ranks of power in this country.

“He was born into a world of Indian agents, where his people could not vote, and where a university degree or serving in the war meant losing your status and the right to live on the land,” wrote Lori Marchand in a tribute to her dad on his 80th birthday.

A teacher in a one-room schoolhouse who believed in the accomplishments of his elementary students sent the Skilwh (Okanagan First Nation) man on his way to becoming the first status Indian to graduate from a public high school in Vernon, B.C.

He completed grades 12 and 13 in one year, and entered the University of British Columbia the next.

There he would meet Sandy McCurrach and Mack Bryson, who would derail his bid for a PhD in rangeland management by talking him into running as the Liberal candidate for Kamloops-Cariboo in the 1968 federal election, resulting in his becoming Canada’s first status Indian elected to Parliament.

Before that, Marchand would work on issues to better the lives of his people as a member of the North American Indian Brotherhood in the 1950s and ‘60s. Mostly, he wanted his people to gain the right to vote.

He had cast his ballot illegally in a 1958 election, two years before his people were granted that right.

“I was in my last year at UBC, living in a boarding house run by the ex-wife of (Haida artist) Bill Reid,” he told KamloopsThisWeek in an interview in 2015.  “She was keen on doing the right thing, getting people involved, so she signed me up to vote and I voted.”

His activism led him to Ottawa, where he helped lobby for his peoples’ right to vote, and worked for Cabinet ministers Jack Nicholson and Arthur Laing, but by 1968 he was ready to leave Ottawa.

That’s when his old university friends interceded and urged him to run for the Liberals in 1968; he found himself campaigning against long-time Progressive Conservative MP for Kamloops, Davie Fulton.

It was a long shot, but Trudeaumania was sweeping the country, and Marchand’s strong connections with the agricultural community in the area pushed him toward a surprise win.

He went on to hold Cabinet positions, including minister of state for small business, dealing with the task of bringing the metric system to Canada.

“I was really getting a lot of heat about metric,” Marchand said in the Kamloops newspaper interview. “So I said to Pierre ‘give me the word and I can dismantle it’. But he told me ‘we are a trading nation and one of the last great nations in the world not going metric’.”

He was also able to use his science background as the minister of Environment.

Over the years, he weathered the FLQ crisis, votes on capital punishment and abortion, and saw the Canadian Constitution repatriated. Heady times until the Liberals were defeated in 1979.

Marchand entered the public sector until being appointed to the Senate in 1984, where he made gains for Aboriginal veterans, winning restitution for them and playing a role in establishing the Aboriginal War Veterans Monument in Ottawa.

Marchand speaks of his humble beginnings in Breaking Trail, his 2000 autobiography co-authored with Matt Hughes, a former political speech writer.

In the first chapter, he surmises his parents must have hitched a ride to the Vernon Jubilee Hospital when he was born – 16 miles from their Six Mile Creek homestead on the Okanagan Reserve Number One – because they were too poor to own a car.

“They probably caught a ride with my uncle Louie, who was the only one in the family who owned a car back in 1933.”

Though he is ashamed to admit it, as a youngster he would tease his mother at the town grocery store. Pointing to signs and labels, he would ask her, ‘what does that say, Mom?’ or ‘what size is that tin?’

Though his mother was not educated, she was an intelligent woman, and managed to do her shopping without help from her ‘smart-aleck son’, he observes.

Later on, he understood how his parents had to live “in a tightly circumscribed world because they could not read, and I would feel an overwhelming sadness and a strong tinge of guilt.”

As a senator, he confides, he begged off becoming involved in Joyce Fairbairn’s literacy programs, able only to cheer her on from the sidelines because “the memories hurt too much.”

Len Jr., Marchand’s son, acknowledged the “down to earth” upbringing his father, along with his six sisters (a seventh died as an infant) and one brother, received.

“My grandfather Joseph Marchand, and my grandmother Agnes Robinson, were devout Catholics. My dad’s sisters weren’t allowed to get away with anything, but my dad said, because he was a boy, he at least got to go to dances and ball games.”

Marchand married Donna Parr, a public health nurse, within six months of meeting her. On their first date, Marchand took her to a square dance, but ended up calling the dances when the hired man didn’t show up. Unfazed, Marchand’s future wife danced with other partners that night.

Len Jr. was gratified to see the condolences that poured in on June 3, the day his father died, acknowledging the difference he made in improving the lives of First Nations people.

Tributes came from Prime Minister Justin Trudeau, whom Marchand held as a baby, Premier Christy Clark, and Senator Nancy Greene Raine, amongst others.

Marchand, 82, was admitted to a Kamloops hospital with kidney problems and died shortly after. He is survived by his wife Donna, daughter Lori Marchand, and son Len Marchand Jr.