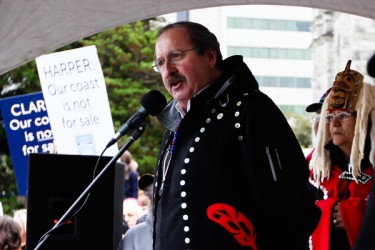 Prime Minister Stephen Harper’s special energy project envoy may have delivered some optimistic words for bringing together the Crown, First Nations and industry in B.C., but nonetheless the province’s Indigenous leaders declared that Enbridge Northern Gateway pipeline remains dead in the water.

Lawyer Douglas Eyford issued his final report on Dec. 5, Forging Partnerships, Building Relationships: Aboriginal Canadians and Energy Development. In it, he recommended the federal government increase its consultations with First Nations and industry when it comes to roughly $100 billion in energy projects, in particular around controversial questions of oil spill safety, job skills training and community benefits.

“It’s never too late to engage and to do so in a process of good faith negotiations,” Eyford told reporters. “There’s an opportunity for engagement and discussion between the project proponent, the Crown and the First Nations communities impacted by that project and all the projects that are the subject of my mandate.
“In B.C. it’s going to be necessary, for success to be achieved, for the federal government to recognize there are regional differences in this province. Governments have to be more nimble and flexible, and better able to meet the interests of the Aboriginal communities in this province on an ongoing basis.”

Contrary to any notion that First Nations are intractably opposed to all development, Eyford met with 80 aboriginal groups and observed that many communities might support resource development if it was environmentally sustainable and improved their “socio-economic conditions,” Eyford wrote in his cover letter.
B.C., unlike most other regions of Canada, has very few historic treaties signed with Indigenous peoples, and has therefore been a closely watched legal battleground over Aboriginal rights and title over recent decades.

Reacting to his report, the First Nations Summit said it was “encouraged” by Eyford’s findings, calling them “critical recommendations that could open the door” to improved relationships between provincial, federal and aboriginal governments.

“Mr. Eyford clearly recognized there are serious deficiencies in the way the federal government engages with First Nations which has resulted in a high level of mistrust,” Grand Chief Ed John said in a statement. “However, it is absolutely critical that the foundation of this engagement must be based on the recognition of First Nations Aboriginal Rights and Title within their respective territories.

“The ball is now in the Prime Minister’s court. He needs to meet directly with BC First Nations on an urgent basis to chart a way forward.”

Eyford, who last March was appointed the government’s Special Federal Representative on West Coast Energy Infrastructure, denied that he was criticizing the government outright or throwing a wrench in the gears of any particular project.

“I hope that my report is going to be perceived as providing objective and blunt advice for all of the parties that are engaged in this process,” he explained.

But Art Sterritt, executive director of Coastal First Nations, lauded the report and said Eyford was the perfect candidate to school Harper in B.C.’s unique legal landscape as a mostly unceded province.

“We think this could be the start of a new relationship with Canada,” Sterritt said. “We hope that happens.

“Here they are trying to move an energy agenda forward, and they don’t have the relationship with First Nations to do that. I suspect there are going to be places in Ottawa that will have discomfort with that, (asking) ‘If this is the legal landscape, why are we not doing the work we need to do?’” ... But we haven’t seen the change yet.”

After receiving Eyford’s report, Natural Resource Minister Joe Oliver welcomed the recommendations, adding that exporting Canadian oil to Asian markets is a matter of urgency and an opportunity that could be lost if transporting oil resources is blocked.

“We have an extraordinary opportunity now to responsibly and safely translate Canada’s abundant resource wealth into an era of sustainable prosperity and security,’’ Oliver stated. “Building stronger relationships built on trust is the key to creating momentum and I personally am committed to making this happen.’’

But Sterritt said the government needs to “rethink” the way it talks to First Nations, not simply consult them on projects before they’re approved. However, with B.C. Indigenous peoples vowing an “unbreakable wall” against the controversial Enbridge Northern Gateway pipeline – which completed its National Energy Board hearings this summer into transporting bitumen from Alberta’s oil sands to a Kitimat, B.C. tanker terminal – Sterritt added that it’s simply too late to gain aboriginal consent.

“I think the feds would be well-served by putting it to bed. Everything Northern Gateway did wrong has informed the decisions and recommendations Eyford has made about doing things properly, how not to get it wrong.”

Eyford’s report concluded that aboriginal communities “constitutionally protected rights” mean that any potential impacts of development must be “taken into account.”

“The failure to do so may result in projects being delayed or not proceeding,” Eyford warned.