Grassy Narrows: The most toxic community in Canada, says scientist 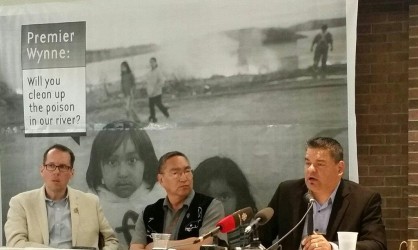 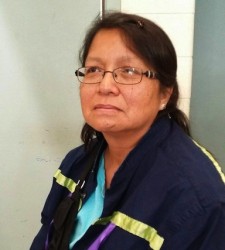 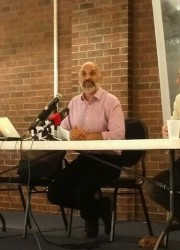 She was speaking at a press conference in Toronto on May 31, along with the Chief of Grassy Narrows Simon Fobister, Ontario Regional Chief Isadore Day, scientist Faisal Moola of the David Suzuki Foundation, and Craig Benjamin of Amnesty International.

During the 1960s, the Dryden Chemical Company dumped 9,000 kilograms of mercury into the Wabigoon and English River systems, the waterway that provides fish and water to Grassy Narrows residents.

Scientist Faisal Moola from the David Suzuki Foundation and the University of Toronto said he has visited many First Nations and has seen the impact of environmental degradation on their territories. “But I have never witnessed something as horrific as what’s going on in Grassy Narrows,” said Moola. Grassy Narrows is, “the most toxic community in Canada” he said.

Multiple generations of Grassy Narrows families suffer from the debilitating effects of mercury poisoning, including loss of vision, balance issues and trembling.

For nearly 50 years, Grassy Narrows has been urging the Ontario government to clean up the river, but the government has refused to act. Ontario had long denied that a clean-up was possible or even necessary.

Grassy Narrows leaders and supporters are in Toronto this week to again ask the Ontario government to clean up the mercury that’s been poisoning the waters, the fish and the people of Grassy for almost half a century.

Chief Fobister is hopeful that this time the government will listen and take action.

A recently-released expert report has found that one of Canada’s most notorious toxic dumping sites can be cleaned safely.

“This week, a new scientific report by three renowned scientists,” said Faisal Moola, “has found that Grassy Narrows Wabigoon River can indeed be cleaned up and the fish can indeed become safe again to eat, but this will only happen if there is political will from Premier [Kathleen] Wynne and her government…

“On behalf of the David Suzuki Foundation and our tens of thousands of supporters, we are calling on the Premier to listen to the science and to adopt the recommendations of the remediation report that has been released by Dr. Rudd and his colleagues yesterday. No single act would go further to illustrate that a new era has dawned in our relationship with First Nations and our shared environment… the science community is saying very, very strongly, the time has come for justice to proceed and for this river to be cleaned up.”

Chief Fobister said, “The momentum is there now. We have scientists now that say it’s possible to clean up the river. The government of Ontario has always said there’s no scientific evidence that the river can be cleaned up, but now they can’t deny it. The ball is in their court now.”

Chief Fobister is also counting on the support of Canadians who have become more aware of how human actions harm the environment. “In the last 30 years, concern for the environment has become stronger and stronger,” he said.

Ontario Regional Chief Isadore Day pledged the support of the Chiefs of Ontario for Grassy Narrows First Nation, “to obtain full remediation of the English-Wabigoon River systems, and that the Ontario government should do the right thing and clean up the river. Ontario now has the opportunity to base their actions on studies that have indicated that the Grassy Narrows First Nation river system can be cleaned up from mercury poisoning and it should be cleaned up,” said Day.

One of the priorities for the Ontario government, he said, has been reconciliation and the day previous, he and other leaders and community members were in the Ontario legislature to witness Premier Wynne’s apology to residential school survivors.