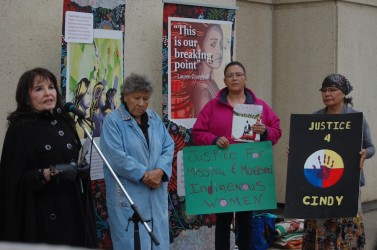 “Travesty and injustice” were the words used Monday morning by the legal director of the Women’s Legal Education and Action Fund as she joined with other organizations, and about a dozen people, to mark the appeal of the man acquitted in the brutal death of Cindy Gladue.

Bradley Barton, an Ontario truck driver, was charged in the June 22, 2011, death of Gladue, a sex trade worker. Last year, a jury found Barton not guilty of second degree murder, accepting that Gladue’s death was due to consensual rough sex.

Muriel Stanley Venne, president of the Institute for the Advancement of Aboriginal Women, led a memorial in honour of Cindy Gladue. (Photo: Shari Narine)

“We can try and have some impact on how this justice system works – or it doesn’t work – for Indigenous women and their families,” said Kim Stanton with LEAF.

LEAF and the Institute for the Advancement of Aboriginal Women were granted intervener status in the Gladue case. However, both organizations were only allowed to submit written arguments.

Stanton says LEAF and IAAW’s submissions to the three-judge panel are “arguments about the importance of treating Indigenous women with the dignity and justice they deserve.”

Muriel Stanley Venne, president of IAAW, says the Canadian justice system “dehumanized and devalued” Gladue by displaying and analyzing parts of her body in the court room.

“The court failed to consider her dignity, the dignity of her family or any Indigenous perspectives or customary laws for caring for the dead,” said Stanley Venne.

“The fight for dignity and respect has just begun,” she vowed.

The appeal court has set aside 90 minutes to hear arguments this morning, says Stanton. She does not expect a decision will come down today.

Both Stanton and Stanley Venne are “hopeful” Barton’s acquittal will be overturned. But hopeful doesn’t mean optimistic.

Stanton says “the best we can ask for in this court system” is that the judges carefully read the material that both her organization and IAAW have presented.

“Doubtful” is how Stanley Venne feels about a change in verdict.

Outside the court house steps, supporters clutched a report entitled, “Our Breaking Point: Canada’s violation of rights in life and death.”

The report, a combined effort of a number of organizations including IAAW and the Stolen Sisters and Brothers Awareness Movement, focused on Gladue’s treatment and states, “We also express the outrage that was sparked by these injustices and place this outrage in the context of long-standing cries of resistance in a country that insists on perceiving itself in humanitarian terms, but continues to violate the human rights of Indigenous peoples. We document how Canada perpetuates and excuses ongoing violence against First Nations, Métis, and Inuit women.

“The aim is to put this outrage, this breaking point, in the context of the many reports, inquiries, and international appeals that all point to systemic inequalities and ongoing colonial relations.”