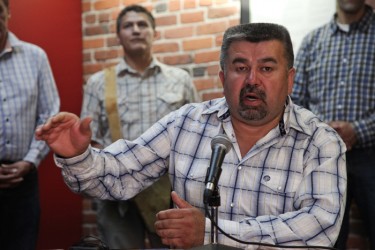 The six Chiefs of the Tsilhquot’in Nations of the B.C. Interior are calling on government to help in dealing with a recent increase in the level of violence in Williams Lake and surrounding communities.

Three separate shooting incidents have rocked the community in the past five weeks, beginning with the fatal targeted shooting of a 20-year-old man on March 20.

On April 25, area schools were closed as a precaution after shots were fired at a home on Western Avenue.

In a media release issued April 27, the Tsilhqot’in National Government called for increased resources to deal with an escalating situation, including prevention and emergency response teams.

Looking beyond those immediate needs, there is also a need to provide more recreational opportunities and cultural support, according to Chief Joe Alphonse, Tribal Chairman of the Tsilhqot’in National Government and Chief of Tl’etinqox.

“We definitely see a need for that, and we have been asking for that,” Alphonse told Windspeaker.

“Tsilhqot’in youth, Shuswap youth, Carrier youth, non-Aboriginal youth – all across the board–are engaged in these activities.”

Media reports cite “gang-related activity” and “outside” individuals being involved in the latest rash of crimes, and harried Williams Lake Mayor Walt Cobb has railed against the “prolific offenders that are wreaking havoc in the community.”

In his statement, Alphonse noted that a majority of those “prolific offenders” went through the revolving door of Ministry of Child and Family Development care, with little access to recreation or culture.

“I’m 48. When I look back at my days as a youth, we were ‘buried’ in sports,” he said. “Today, the vast majority of youth are not involved in recreational activities or cultural activities. We are really missing the mark when social media is the only form of entertainment these young people have.”

Alphonse said getting Tsilhqot’in youth re-connected to their culture is critical.

“We need to spend the time, out on the land, teaching our culture,” he said. “We can drown the gangs out with recreation, sports and culture.”

Alphonse conceded that the 21st century low-wage/long hours economy has made it increasingly difficult for families to provide the sort of recreational opportunities he and his peers enjoyed.

“I spent all winter playing hockey – the skating rink was our babysitter. We spent all our summers on horseback, riding horses and dreaming about being the next World Champion saddle bronc rider.”

But that involved a lot of parents and extended family members and a lot of volunteers with the time, energy and resources to get children out to the games and competitions, and traditional activities like gathering berries.
Families are now hard-pressed just to provide the necessities like food and shelter. It’s not like the problem hasn’t been studied, Alphonse said.

“In our community, we had the Lost in the Shadows Report, which spoke to the many services the band offices should be providing. But the resources just aren’t there. I don’t know how many of these reports we’re going to need before we actually get something.”

Looking at it cynically, Alphonse observed that the study of social problems is in danger of becoming a self-perpetuating industry in itself.

Alphonse said his people hold immense – and well-deserved – pride in their culture and tradition, but that does not translate into an appropriately high profile in the wider community.

“We were the first First Nation to win Aboriginal title (the Tsilhqot’in Decision) in the world. We have Big History. We are one of the only First Nations in Canada to declare war on white people: the Chilcotin War of 1854.

“We have a lot to give in terms of history. It should be taught in the schools, but as of right now, there is nothing about our culture in the schools. If you go around the City of Williams Lake, you won’t see First Nations artwork, you won’t see First Nations influences. We have to start recognizing each other’s culture in the areas where we live.”

That picture is changing, according to School District 27 Superintendent Mark Thiessen. Thiessen said First Nations culture is an integral part of his district’s strategy of keeping students engaged.

Thiessen emphasized the need for schools to be welcoming places for all students and their families. He noted that SD 27 has students from Tsilhqot’in, Shuswap and Carrier Nations – 13 Nations all told.

“In some of our schools we have just one Nation and in some we have all three, particularly in our high school in Williams Lake. We also offer language courses in all three languages, if we have enough students from year to year. That’s at the elementary and secondary level. That’s a huge piece of our cultural strategy.”

Like many B.C. school districts, SD 27 has a First Nations Education Committee that meets once a month.

“They have Education Coordinators from all of the 13 bands in our region. That table also decides on proposals they receive from schools that have to do with cultural programs… making drums, or a First Nations dance group, or a visit to Xatśūll Heritage Village – that’s a Shuswap cultural village about a half -hour north of Williams Lake.

“So there are a whole variety of things we try to bring into our schools, for our First Nations students, but also for our non-Aboriginal students, to help them appreciate the First Nations culture that is around them.”

Asked to provide a glimpse into what First Nations culture might look like in a SD 27 school, Thiessen readily provided a page from his regular blog https://bigrocksfirstblog.wordpress.com/2014/11/25/using-the-medicine-wh...), describing a November 2014 visit he made to Dog Creek Elementary/Junior Secondary School.

Titled Using the Medicine Wheel for Project-Based Learning, Thiessen described how the students, aided by sponsors, created projects based on the four spokes (emotional, physical, spiritual and intellectual) of the wheel.
Ultimately, Alphonse believes, it will take an improvement in the economic picture for his people to attain their rightful position in B.C.

"Our families in the Chilcotin see this as one of the best places to live. We are not trying to run anybody out. But at this point, our communities are calling on us and we don't have the resources to help our people."

The Tsilhqot'in Decision gave the Tsilhqot'in Nations a new level of control and authority over the natural resources in their traditional territories. But there is still a need for outside investment, Alphonse explained.

"Even without the agreement, if companies were willing to work with us, we didn't need an agreement," he said.

But in reality, Tsilhqot'in first had to fight to prove Aboriginal title to the courts and now they have to fight to force outside companies to recognize it.

"Our door is open. We want companies to come in and work with us. We have a lot of resources, but we've had to fight to keep some companies out, because the companies that have wanted to come in have not wanted to answer to us or share their resources.

"That's not what we want. We want companies that are willing to work with us to create job opportunities and to share the revenues created by those resources."

That was a point emphasized by Chief Bernie Mack of ?Esdilagh First Nation in the media release.

"Along with cultural and social support, we also need leaders to provide jobs for our youth. We need to ensure our troubled youth are employable – with their Grade 12 and driver’s license.”

Chief Ervin Charleyboy of Tsi Deldel First Nation noted that, beyond prevention, violence in the community still comes down to enforcement.

“We need to revamp our whole justice system and address the challenges that we are facing out here. The Tsilhqot’in will be establishing our own committee to come up with a strategy that works for us.”