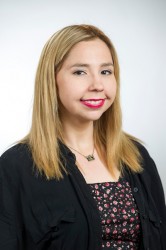 These are exciting times to live in with Indigenous people expressing themselves through art, music and literature in ways that have never been seen before.

A great example of this is Anishnaabe playwright Frances Koncan, who is finding her own unique voice in Canadian theater.

She’s telling a historically Indigenous story, but in a way that perhaps hasn’t been considered before with the play Zahgidiwin Love.

“We’re calling it a de-colonial comedy. A dark comedy, a satire exploring the trauma of residential schools and colonialism, spread across some fictional landscapes. It follows this one character who exists through three different phases. In a residential school in the 50’s, in the future in a kind of post-apocalyptic feminist utopia, and also in contemporary society where she is kidnapped and missing.”
Though her subject matter has bleak and troubling undertones, Koncan seeks to highlight the comedy over the drama.

“People are very serious in their approach and I think that’s very beneficial. For me, that’s not how I live my life. That’s not how I speak about my experiences. There’s more truth in humour. Drama masks the truth in a way where comedy is only funny when it is truthful.”

Studying at Brooklyn College in New York has empowered Koncan to return to Canada with a mission to tell stories that are more true to her views.

“People in New York develop an insane level of fearlessness. What I wrote before tended to be a lot safer. It always had humor and sharpness, but I felt like I didn’t want to make people uncomfortable. Now I don’t really care. For a while, things felt really nice in Canada. It’s nice to see more plays that are disturbing people.”

“B current” is the theatre group that will host the first look at Zahgidiwin Love at their sub-festival rock.paper.sistahz. The play runs May 3 to 7 at Artscape Wychwood Barns.

B current has been curating culturally-rooted theater in Toronto for 25 years and rock.paper.sistahz is now in year 14.

It’s a festival meant to showcase works by emerging and established artists of colour from across Canada, and is the ideal setting for Koncan to share her work with Toronto audiences.

“We’re doing this piece at the Winnipeg Fringe Festival,” said Koncan, “but taking it to Toronto, and hearing feedback from those audiences is going to be completely invaluable in making it a better show.”

She said there isn’t anything in Winnipeg that has a mandate for diversity.

“The fact that there is a company in Toronto actively seeking out works from these perspectives is fantastic. It’s hard to tell what a play is. In theater especially, you never really know until an audience comes in and lets you knows what’s working.”