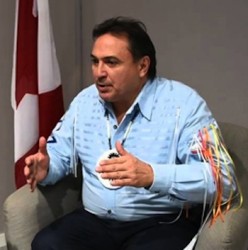 First Nations in Canada are polarized when it comes to oil and gas development.

First Nations have been vocal on both ends of the spectrum.

In late September, more than 50 First Nations—including some from the northern United States —signed the Treaty Alliance against Tar Sands Expansion to block Energy East, along with Kinder Morgan’s Trans Mountain pipeline to the West Coast, Enbridge’s Line 3 replacement and the ill-fated Keystone XL project.

The pact has brought together First Nations from British Columbia all the way across the country to Quebec.

But there are First Nations’ proponents for pipeline development. The Indian Resource Council (IRC), which was initially formed with the mandate of being a watchdog organization over oil and gas companies, now represents and advocates for First Nations oil and gas producers.

A report commissioned by IRC earlier this year looking at First Nations involvement in the energy sector in western Canada, points out that “dozens of First Nations communities have signed agreements with pipeline firms.”

Along with these agreements, there are other First Nations—Onion Lake, Frog Lake and Fort McKay—that operate band-owned oil and gas companies.

“First Nations have moved from the periphery to the centre of natural resource development in Canada and have, in addition, emerged as major players in the national debate about approval processes related to pipeline construction,” states the report.

“Major players” means playing a role on both sides of the debate, a fact the report acknowledges.

“On the one hand, the natural resource sector is the largest employer of highly-paid First Nations workers in the country… (but) at the same time, pipelines and the complexities of petroleum exploration and development have created numerous flashpoints and conflicts between Aboriginal communities, companies and governments.”

Although the AFN is not a rights or title holder, Bellegarde believes the organization can play a key role in bringing about “respectful” understanding between the two opposing sides.

“We can facilitate and bring together the differing opinions amongst our chiefs and try to seek common ground and find common space so that things are done in a respectful way,” he said.

Bellegarde says that economy and environment must be held in balance.

“We want to be part of the economy, we want to create wealth, we want to create employment for our people, but at the same time, we’ve got to be balanced. We want to see development, but at what cost? Not at any cost. We want to make sure that there’s long-term sustainable economic development strategies so the land and water is protected, that our environmental footprint is not 10 miles wide, that there is that respect that is there,” he said.

The answer could lie in green energy development, Bellegarde said.

Bellegarde was one of several Indigenous leaders and proponents to accompany the federal government to Paris late last year for the United Nations climate change conference. The result of the conference was a global agreement reducing carbon emissions and greenhouse gases.

“So we’ve got to start transitioning away from dependency on fossil fuels to start looking at alternatives for clean energy. And that’s got to be part of the plan and the solution going forward. That’s what we see happening. And a lot of our First Nations are starting to embrace that across Canada,” said Bellegarde.

Henvey Inlet Wind, in Ontario, has partnered with Pattern Energy, a private company, to build a 300-megawatt wind farm on Henvey Inlet First Nation. Construction on a transmission line to get wind power to the Ontario grid is to begin this winter. The wind power project is expected to bring significant revenue to the First Nation.

In Alberta, solar energy is taking off, with solar panels going up on a variety of buildings located on First Nations lands. Louis Bull Tribe Councillor Desmond Bull says the solar panels on four public buildings on his First Nation have the potential of saving the band $7,500 annually, money that can be put toward other much-needed services and programs.

“Creating less dependency on fossil fuels is the ultimate goal because there’s only one world, the water and the air we all need to be clean, to drink so we’ve got to start transitioning away from that demand,” said Bellegarde.