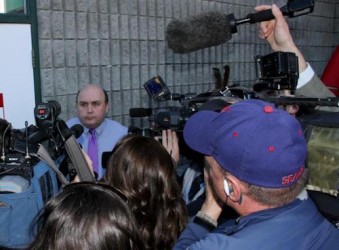 Three years after he allowed a racist letter to be printed in the now defunct Nanaimo Daily News, the editor of that newspaper has been contracted as a communications consultant with the city.

It may seem like a strange turn of events, says Nanaimo Chief Administrative Officer Tracy Samra, but she made the offer to Mark MacDonald as an act of reconciliation.

It is one step in a long list of steps both MacDonald and Samra have taken. Right after the letter was published in 2013, Samra, not the city’s CAO at that time, approached MacDonald and offered to write a column that would debunk Indigenous stereotypes and shed light on immigrants and multiculturalism. MacDonald took her up on the offer and she wrote 10 columns.

“From my perspective, it was getting Indigenous issues out there and getting a voice in a paper that didn’t necessarily give that voice,” said Samra, who is a lawyer and member of the Saddle Lake Cree Nation of Alberta.

Since then, MacDonald, who ran unsuccessfully for the Conservatives in the last federal election in the riding of Nanaimo-Ladysmith, explained his actions to the neighboring Snuneymuxw First Nation and attended numerous multicultural events.

“We can marginalize and attack people or we can reach out and try to educate, and, through reconciliation, see where we can go,” said Samra.

But impressive may be surface only – despite a news release issued by council in March when Samra successfully completed her interim period as CAO and council bragged her up as “Nanaimo's first female and first Aboriginal CAO.”

It hasn’t been a positive experience since then – nor before, says Samra.

In a public statement read by Samra at the May 16 council meeting, she said her working environment had gone from “challenging” to “hostile” because of the actions of Mayor Bill McKay and Councillor Diane Brennan.

Samra outlined the steps taken by both McKay and Brennan to overturn her appointment as interim CAO and as permanent CAO.

When Samra was appointed as interim CAO, Brennan asked McKay to suspend her and investigate the appointment. Legal advice from city corporate lawyers and an independent law firm confirmed the hiring process was lawful.

Samra said Brennan continues to “openly challenge” the CAO’s decisions in front of staff and recently in the media.

As for McKay, he has approached Community, Sport and Cultural Development Minister Peter Fassbender and the provincial ombudsman to investigate Samra’s hiring. Neither took action, with Fassbender’s office saying a motion from council would be required to launch an investigation.

WorkSafe BC did investigate Samra when McKay accused her of creating an unsafe work place and found no reason for concern.

Samra said while council had taken both formal and informal action to direct McKay and Brennan to “cease such conduct,” there had been no improvement. She said she would not resign despite McKay’s and Brennan’s efforts. She ended her statement by asking McKay to commit to a professional relationship.

Instead, McKay said, “Well that was probably one of the most bizarre things I have ever heard.”

However, Samra’s statement received applause from the public gallery.

Speaking a few days after that council meeting, Yoachim says Samra is not wrong in her assessment of the situation. Yoachim says it is “night and day” how McKay treats Samra and how he treated the previous CAO. Samra began as interim CAO in November 2015. McKay was elected as mayor in the province-wide municipal elections on Nov. 15, 2014.

“I can’t figure out why the mayor is having such a difficult time working with Tracy Samra considering … she’s bright,  intelligent, doing a good job following the mandate of the city,” said Yoachim, who was elected the same time as McKay.

Yoachim admits that he and the mayor have clashed as well.

“I have my challenges with the mayor and I’m sure he has his challenges with me. I would hope that (me being an Indigenous person) wouldn’t be a factor, but at times, the way Tracy has been treated and myself at times, one could not rule it out,” said Yoachim.

Brennan, speaking a few days after Samra’s public statement, would not comment on either Samra’s allegations or Samra’s work.

“It’s just not appropriate. This would be a personnel issue and whether I have concerns or not really isn’t something that I can talk about publicly,” said Brennan. She added that she had supported Samra’s appointment as permanent CAO.

“Strictly speaking, (Samra) followed procedure,” said Brennan. “But I do have concerns because of the earlier issues with the Nanaimo Daily News when he was editor there. There was a lot of upset in the city.… It kind of gave us a black eye.”

As far as Samra is concerned she heard from the people who the letter targeted and offended. She spoke to councillors at Snuneymuxw First Nation and First Nations people in the city and they voiced no concerns about her offering the contract to MacDonald.

“I honour what happened. I’m not going to pretend it didn’t. I know he can be a lightning rod for other people, but I did what I needed to do with my dialogue with the local First Nations,” said Samra.

Reconciliation is also high on Yoachim’s agenda. He said he took a leave from Snuneymuxw band council, which he sat on for 14 years, to run for Nanaimo city council.

“The reason I ran was to bridge our two communities and I successfully got in the city election,” he said. He believes city council has done good work, pointing at the zero per cent increase in taxes. He also believes that Samra has produced quality work and says she could only do better without the animosity displayed toward her by McKay and Brennan.

“The country is in an era of reconciliation and trying to reconcile with Indigenous peoples across the country. It doesn’t make sense. Why wouldn’t you embrace this beautiful situation we’re in?” said Yoachim.

McKay did not respond to a request from Windspeaker for an interview.