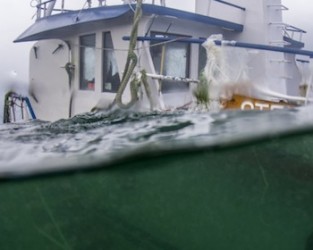 The Heiltsuk Nation is disappointed to learn that the federal government is withholding analytical data arising from early environmental sampling after a tug and barge ran aground Heiltsuk territorial waters.

These samples, collected by the Department of Fisheries and Oceans and handed over to the Department of Environment and Climate Change, may contain information critical to Heiltsuk decision-making around human and environmental health, reads a statement from the nation dated Nov. 10.

“In the very beginning, we made the decision to collaborate,” said Chief Councillor Marilyn Slett. “We’ve supported the Incident Command System approach to response, and acted with integrity in the expectation that everyone else at the table would do the same.

“DFO and ECC have clearly missed the message on federal reconciliation.”

Since the tug ran aground on Oct. 13, releasing an unconfirmed amount of diesel into key Heiltsuk cultural and food-gathering sites, the nation has struggled to fully assess the impacts – cultural and ecological – to its people.

For Heiltsuk Incident Commander Jess Housty, this refusal to collaborate marks a conspicuous betrayal of shared values agreed to by Unified Command.

“This hoarding of critical information is preposterous in a situation where every other party has agreed to work together on sampling and analysis.”

“DFO and ECC are potentially putting human and environmental health at risk, and certainly jeopardizing the trust that has enabled Unified Command to collaborate smoothly on incident response.”

Repeated Heiltsuk requests for data access have been ignored and community leadership is frustrated by federal roadblocks preventing governance based on the best available information.

“It’s 2016,” says Chief Slett. “We shouldn’t have to fight these battles just to get access to information about disasters on our doorstep.”