Expanded FASD assessments gets kids on the best track sooner 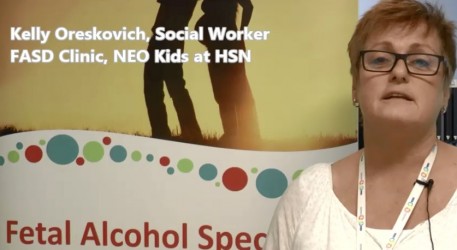 Health Sciences North (HSN) in Sudbury, Ont. announced May 19 that the Fetal Alcohol Spectrum Disorder (FASD) clinic at NEO Kids is now accepting referrals for children under the age of six. Previously, the clinic dealt with children between the ages of six and 18.

New Canadian guidelines use a series of indicators to determine if a child under the age of six has impairments that suggest FASD, even though a diagnosis may not be confirmed because of the child’s young age.

“The new diagnostic guidelines are extremely important as they make it possible to identify at an earlier age children with FASD and those at risk of FASD. Children designated at risk are to receive the same services and interventions as children with a confirmed diagnosis of FASD,” said Kelly Oreskovich, a social worker with the FASD clinic at NEO Kids.

“We know that early intevention and support leads to better outcomes in life.  So the earlier the child is diagnosed or identified as at risk, the better.”
The FASD clinic at NEO Kids opened in 2011, and was a partnership between HSN, the Anishinabek Nation, Mamaweswen North Shore Tribal Council, the Shkagamik-kwe Health Centre (Greater Sudbury), and the Noojmowin Teg Health Centre (Manitoulin Island).

“This collaborative effort in developing the FASD clinic has meant that families living with FASD can access an assessment closer to home and with community supports,” said Carol Ann Cheechoo, director of Community Programs with Shkagamik-Kwe Health Centre. “The opportunity for assessment and diagnosis of FASD at earlier ages provides for more community resources to be identified to support the families earlier.”

In the past five years, the FASD Clinic has assessed 180 children from across northeastern Ontario. So far in 2016, the number of referrals to the FASD Clinic is equal to the referrals in all of 2015.
The FASD Clinic at NEO Kids accepts referrals from the general public. To refer a child for FASD assessment contact NEO Kids at 705-523-7120 ext. 1073 or koreskovich@hsnsudbury.ca