Elder understands the struggle with suicide 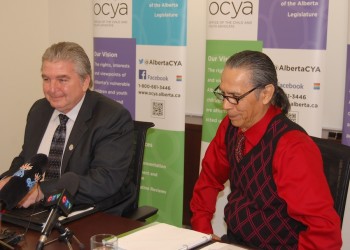 “In my life I have thought about suicide,” said Elder Francis Whiskeyjack.

Whiskeyjack sat alongside Child and Youth Advocate Del Graff on Monday as they shared the disturbing report of seven Aboriginal youth, who killed themselves over an 18-month period beginning in June 2013.

Whiskeyjack is a residential school survivor. He is the adult child of alcoholics. His mother died of hypothermia due to domestic violence. His story is not so different than those of the seven youth, including two brothers, who are the focus of this report.

“The lives of Asinay, Cedar, Sage, Morley, Kari, Victoria, and Jacob were each marked by the presence of risk factors for suicide. They all experienced early childhood trauma resulting from exposure to domestic violence, parental addictions and/or parental mental health issues. Most were separated from their loved ones and from healthy family connections and they experienced multiple moves. A number of them also experienced the death of family members by suicide. Many came from backgrounds and communities of socioeconoimc disadvantage. All were impacted by the legacy of residential schools,” reads the report, entitled, “Toward a Better Tomorrow.”

All took their own lives while either receiving services from Child Intervention Services or having received services within two years of their deaths.

Whiskeyjack says what turned it around for him was his Elder mentor. Having that support system and discovering his Native spirituality gave him the strength to make the difficult decisions and helped him to “walk a straight path.”

Whiskeyjack was adamant that Native spirituality was not the answer for all Indigenous peoples. He points to his own siblings, who find strength in Full Gospel and Roman Catholicism.

For the past 13 years, Whiskeyjack has been working with students at Amiskwaciy Academy, in Edmonton. The talking circles he conducts provide the young people with a safe environment to voice their anger and their problems and to know that they are being heard.

“It builds a special sacred relationship,” said Whiskeyjack. “(It) gives them the hope they need.”

“When you have someone of Elder Whiskeyjack’s stature in the schools and available to young people that makes a tremendous amount of difference but we don’t have those kinds of people in all of our school systems or in our health centres, or other places where they might be accessible to them. I certainly think there needs to be some change,” said Graff.

Supports are difficult to find in remote, isolated communities, says Whiskeyjack. Social workers don’t understand the communities they find themselves working in.

And supports are not that easy to find in urban centres either, says Graff, who points to existing programs that don’t offer space for cultural practises.

“We’re asking government to think more broadly about what is included in mental health so that perspectives of the Elders can be brought to the floor for the young people when they’re struggling,” said Graff. “In our view, it’s critically important.”

Along with the stories of the seven youth, “Toward a Better Tomorrow” offers 12 recommendations in three categories: community-led strategies; a holistic approach, which means addressing physical, psychological, emotional and spiritual needs; and building protective factors, such as “conditions or characteristics that promote social, physical, emotional and psychological health and well-being.”

Graff is confident that if all these recommendations are implemented with urgency they will go a long way in making a difference in the lives of Aboriginal youth.

Whiskeyjack holds that these recommendations, which he consulted on, along with the youth helpers he is working with, will have an impact. But he doesn’t expect to see a turnaround in his lifetime. Whiskeyjack turns 68 in June.

“A hundred years of damage. That’s what we’ve done,” said Whiskeyjack. “(This was) cultural genocide, I think there could possibly be a treatment, a cure, but it’s going to take another hundred years to try and find a treatment or a cure for it, it’s possible.”