Dobson remains calm and steady between the pipes 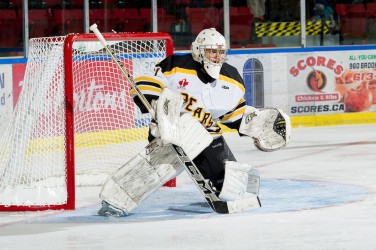 Bradley Dobson is making quite a name for himself, albeit far from his original home.

Dobson, a member of the Moose Cree First Nation, was born in the remote northern Ontario community of Moose Factory.

The 17-year-old is now starring in his first season of Junior A hockey with the Smiths Falls Bears. The Bears compete in the 12-team Central Canada Hockey League, comprised of teams in and near Ottawa and surrounding areas in eastern Ontario.

Despite being a rookie with the Bears, Dobson, who will turn 18 on Dec. 31, had a league-leading 2.24 goals-against average after his first 13 appearances.

Dobson, who had registered two shutouts already, also had six victories to his credit. And he had secured single points for his squad in two other matches, via an overtime setback and a shootout loss.

In fact, things are going even better than just great for Dobson. He was recently selected to represent the league in the Eastern Canada Cup All-Star Challenge.

Bears’ coach Mark Grady said Dobson is just a soft-spoken individual who is getting the job done for his club.

“I can’t even make up stuff about him,” Grady said. “He’s just a quiet kid. And he stops pucks.”

The fact Grady is a Dobson supporter was further proven this week when the Bears acquired 19-year-old puck-stopper Bo Taylor from the Baie-Comeau Drakkar in the higher calibre Quebec Major Junior Hockey League.

With Taylor’s arrival, Grady, who is also Smiths Falls’ general manager, was forced to move one of his other goalies. But he kept Dobson and traded 18-year-old Brennan Kitchen to the CCHL’s Cumberland Grads.

“He looked like he could play (in the CCHL),” Grady said.

But the Bears’ coach/GM wasn’t sure if a 17-year-old could be his starting goalie.

Dobson was actually hoping to play at an even higher level this season. He attended the main training camp for the Ontario Hockey League’s Niagara IceDogs. Though he had a solid camp Dobson was released.

But the IceDogs’ brass was unable to send Dobson to their Junior B affiliate, the St. Catharines Falcons, members of the Greater Ontario Junior Hockey League. That’s because the Falcons had already committed to other individuals for their goaltending positions this season.

Grady, who had kept tabs on Dobson after his appearance at the Bears’ camp in the spring, then invited him to join the Smiths Falls club.

Though he is being billeted elsewhere, a selling point for Dobson was that his grandparents live in Smiths Falls.

“They’re like five minutes away so I can go have dinner with them,” Dobson said.

When he’s on the ice, Dobson tries to keep things simple.

“I’m very calm and I try to limit my movements,” he said. “I just try to stay square to the shots.”

Dobson’s favourite pro goaltender is Frederik Andersen, who joined the Toronto Maple Leafs this past June after spending the previous three seasons in the NHL with the Anaheim Ducks.

Dobson said the Danish-born Andersen was his favourite pro net-minder even before he was traded to the Maple Leafs.

Grady admits he hasn’t seen Andersen play too often so he is reluctant to compare Dobson to the Maple Leafs’ current goalie. Instead, he said Dobson’s calmness between the pipes reminds him of another Native pro, Carey Price of the Montreal Canadiens.

Though ice hockey is Dobson’s first love and he’s hoping to take the sport as far as possible, he’s already a world champion in another sport.

During the summer Dobson was a member of the Canadian squad that captured the world under-18 ball hockey tournament in the Czech Republic.

He only started playing ball hockey three years ago but his play at provincial championships caught the attention of national team officials.

Dobson said he never envisioned being a world champion in that sport.

“If you had told me that a few years ago I probably wouldn’t have believed you,” he said.