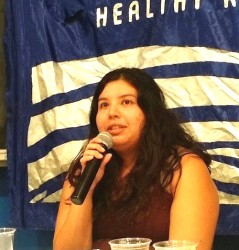 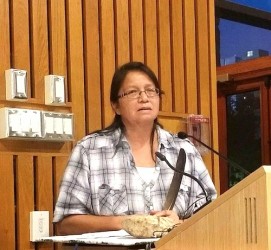 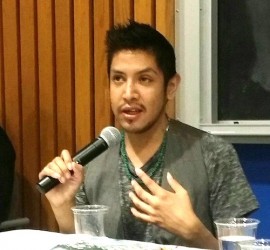 Gray was speaking on a panel at Water is Sacred, an event held at the University of Toronto on Sept. 20. She has been an environmental activist since her early teens.

“Our community’s relationship to the water was always different, because it’s dangerous, just like it is in Grassy Narrows and many other Indigenous communities,” said Gray. She was born into a place called Chemical Valley, a centre for oil refining and petrochemical production and home to 62 facilities and refineries in a very small area surrounding her First Nation.

“I was born into this environment that was very dangerous, including the water,” she said.

The water and concern for its protection is what connects people, she said. Her community has used the Great Lakes for commercial fishing, for sustenance, trade and travel and to practice their way of life.

It is an act of resistance to be speaking tonight, said Gray, because the Canadian government continues to put money into shaming and silencing Indigenous people.

“They’re still working really hard to make things worse for us,” Gray said. “We’re seeing new pipeline projects. We’re seeing old pipelines with new products in it. That’s why it’s such a privilege to be here to continue the resistance to everything that’s here to try to hurt us and silence us.”

Cheers and applause erupted from the 200 people attending the talk.

Gray told the crowd she is facing jail time. She was arrested on Dec. 21, 2015 after she and two other women shut down Enbridge’s Line 9 just outside of Aamjiwnaang and Sarnia. They locked their necks to the valve to prevent the operation of the pipeline.

“I’m being charged with mischief and endangering the lives of others, which are not light charges.” Her preliminary trial date is set for February in Sarnia.

Vanessa Gray is not a criminal, said Judy Da Silva. She is a land defender and protector of the land. Da Silva is a grandmother and leader from Grassy Narrows.

“She could face 25 years in jail,” Da Silva said of Gray.

Da Silva told the audience that the photos she had taken of tonight’s crowd would be shared in her community. When people get discouraged and feel down, she said, I’ll show them your pictures and tell them, these are people in Toronto who support us.

“I need you guys here in Toronto,” Da Silva said. “You’re three million people and you can access 100,000 voices. We are 800 people who live in Grassy, our voice is so tiny and your voice is so huge and that’s where you can pressure [Premier Kathleen Wynne] for us.”

Japanese researchers Dr. Masanori Hanada and Dr. Naoki Morashita gave an overview of the research they undertook in Grassy Narrows and Wabaseemoong in 2014. Their major finding is that 90 per cent of the population in the two communities are suffering from symptoms of mercury poisoning. This includes people who are under 30 years of age. Dr. Hanada, an expert on Minamata disease, and his colleague received a standing ovation for their commitment to both communities.

“The mercury poisoning that happened with Grassy Narrows came from Dryden, Ont.,” he said. “It’s dumped into the river from the paper mill and then all the toxins came all the way down and affected all our waters, our land and our fish, and we eat the fish. And we continue eating the fish because that’s our way of life. And it affects us deeply. It affects my family, my community and has made our people sick.”

Fobister said he was frustrated that the government ignores and denies the existence of Minamata disease among the people of Grassy.

Several women sang a song in honour of the water. When they finished, Da Silva said “We are not going to close the evening. We’re going to leave it open because the fight is on!”