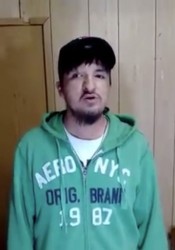 A young member of Sachigo Lake First Nation has set out on a 2,000-kilometre trek from his home in Northern Ontario to raise money for people impacted by the devastating wildfire in Fort McMurray.

Stanley Barkman, 26, set out from Sioux Lookout on May 9, and hopes to reach the Alberta oilpatch capital in six weeks.

Stanley’s father, Robert, is driving the support vehicle. Windspeaker spoke with him shortly after Stanley passed his first 10 kilometre-mark, under sunny skies.

“It’s been gorgeous for the past month. It’s a little hotter than normal – 22 [Celsius] right now,” Robert said.

“Right now, he is walking by himself. There are two others who will join him in progress.”

The proud father said Stanley has no relatives or friends in Fort McMurray, but the images of destruction and dislocation have moved him deeply, and he is the kind of man who is prepared to take action.
“This isn’t the first time he’s done this,” Robert said. “On one occasion, he did a fundraiser for one of his buddies who needed a CT scan. And right now, he’s part of an ongoing project in Thunder Bay. They are raising funds to build a Living Centre for First Nations students who have to travel to Thunder Bay to attend school. Right now, they are scattered all over the city with strangers. We did a walk in February.”

In a media release, Stanley said he is determined “to help rebuild Fort McMurray and surrounding communities” through his efforts.

“No one deserves to lose their home, neighborhood or even their town from this devastating wild fire,” he said.

If you would like to show your support, and/or make a donation, there are a number of options.

There is now a Facebook site, “Walking for Fort McMurray,” where you can view his video (https://www.facebook.com/StanB18/videos/1182801508420754/), and a Twitter site, hashtag #WalkingforFortMcMurray.

You can help cover the cost of the project by making a donation at gofund.me/Walk4FortMcMurray.