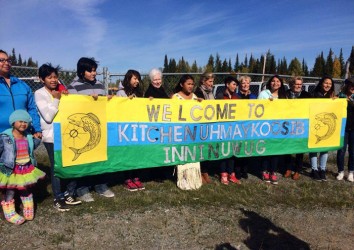 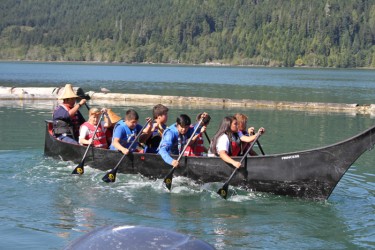 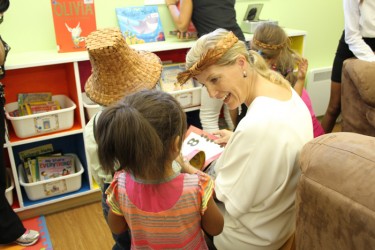 The Countess of Wessex, Sophie Rhys Jones, daughter-in-law of Queen Elizabeth II, has become a royal rock star in some First Nations communities across Canada. She charmed people in little remote communities on the West Coast of Canada and endeared herself completely to the people of Kitchenuhmaykoosib Inninuwug (KI) in an isolated part of northern Ontario where she spent two days.

She was the first member of the British Royal family to visit the community since its treaty with the Crown was signed in 1929. She was accompanied by Ontario Premier Kathleen Wynne, Lieutenant Governor-designate Elizabeth Dowdeswell, Ruth Ann Onley, wife of outgoing Lieutenant Governor David Onley, and Vicki Heyman, wife of the U.S. ambassador to Canada.

It was a tight squeeze for the delegation, with the countess taking one of only two rooms in the only inn in KI, and the others bunking with community members. A fairly ordinary occurrence when visitors travel into such communities, but for the royals, a fairly unusual situation.

She had breakfast with the Canadian Rangers, who made her an honorary member of the group. The Rangers are a component of the Canadian Armed Forces Reserve operating in northern, coastal and isolated areas of Canada providing patrols and national security and public safety missions.

The youth of the community were filled with hope and dreaming of the next possibilities for their community and school after the royal visit, said Andree Cazabon, filmmaker of 3rd World Canada. The film follows the community of KI over two years and reveals the many factors that lead to the marginalization of First Nations people in hopes of closing gaps in living conditions.

“Now that they pulled off this Royal visit, they feel that they can pull their efforts together and make change happen within KI,” Cazabon said. The youth want to travel south to share their story and love for community and build bridges.

And 13-year-old Raven Chapman says she misses the Countess and hopes she will see her again.

Later, the delegation attended Nipissing University in North Bay and the First Nations Education Symposium where the Countess addressed 400 people, and talked of the importance of saving Aboriginal languages and culture.

“Language is what often defines us as a people. It is part of our history and who we are. And especially within communities where language is not being documented, but passed from generation to generation verbally, it is vital that we ensure survival of these dialects. This is not a move to create division between people but a celebration of difference and a way of enriching all the people of Canada and its heritage.”

The Countess of Wessex also spoke about the need to help heal the wounds and “painful memories” of the residential school era.

“We need to ask about what can done to ease their suffering,” she said.

The Earl and Countess of Wessex, Prince Edward and his wife Sophie, don’t garner the same attention as the luminaries that are Prince William and Princess Kate, for example, but Edward’s and Sophie’s visit to Canada Sept. 12 to Sept. 19 was a triumph in their work of reconciliation and repair of the tattered relationship between the British Royals and First Nations people.

On Vancouver Island in British Columbia the couple opened a small library as part of the Write to Read program initiated by former Lieutenant Governor Steven Point, a member of the Sto:lo Nation.

They were very down-to-earth people, said elected Chief Jack Thompson. They had time for everybody and didn’t leave anybody out, he added.

Sophie even got into a traditional canoe with youth from the local paddle club and took a spin round the lake. Later that day the couple was in Mangis at Laert Bay for an evening display of cultural song and dance.