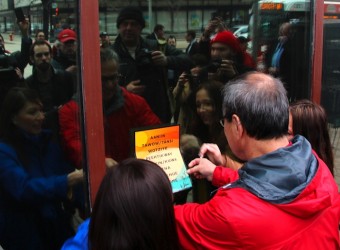 It is also a challenge to downtown businesses to work towards greater reconciliation with the Indigenous community, fostering understanding, respect, and dignity.

The decal initiative addresses the fourth guiding principle outlined in the Truth and Reconciliation Commission report: "Reconciliation requires constructive action on addressing the ongoing legacies of colonialism that have had destructive impacts on Aboriginal peoples’ education, cultures, and languages."

Business leaders also took part in a workshop to learn more about the historical and contemporary issues that relate to the treaties and what that means for Winnipeg. The City of Winnipeg announced it will post the decals in downtown and inner-city recreational facilities.

Lisa Meeches, a member of the Downtown Winnipeg BIZ's Aboriginal Peoples' Advisory Committee said the group can “play a role in inspiring downtown businesses to find and create opportunities to enhance and improve mutual respect for all Indigenous peoples.

“By encouraging greater awareness of the importance of the Indigenous community in our downtown, it will hopefully unite the community, promote cross-cultural celebration and awareness, and further economic development opportunities.”

More than 80 businesses have already signed on to the decal initiative.