Chocolate Woman a creation of the transformational spirit 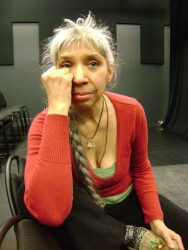 Writing and performing in Chocolate Woman Dreams the Milky Way was a journey of discovery for Monique Mojica, actor and playwright. Mojica is descended from the Guna people of Panama and the Rappahannock of Virginia and currently lives in Toronto. She performs in the play together with her mother, Gloria Miguel, a founding member of New York’s Spiderwoman Theatre.

Chocolate Woman is a story of reclamation and transformation. When asked what inspired and motivated her to write the story, Mojica said, “I got tired of the victim narrative. I’ve got so much grief, I got so good at being entertaining with my grief, but I was bored. So I asked myself, what would my stories be like if I started from a place of what I am connected to, of what is still whole. What have I got that isn’t broken?”

Her question was answered when Chocolate Woman—Buna Siagua—a deity of the Guna came to her. “She’s the spirit in cacao and the most sacred medicine we have,” Mojica said. The next deity that appeared was Morningstar Woman, and Mojica only learned while she was writing the play that her grandfather had named her for the Morningstar.

“The other part of the inspiration,” she said, “was that I was in a really dark place, a time of crisis in my life.” She recalls phoning a close friend in the early hours of the morning and telling her, “I feel like I’m falling and there’s nothing there beneath me and it’s terrifying.”

Her friend gently suggested she go ahead and fall because when Sky Woman landed, there was transformation. That led her to explore other influences in her life, and Alice falling down the rabbit hole also appears in the play.

The story has no plot but Mojica seems to take us by the hand and we feel privileged to accompany her on her journey, trusting she will not lead us astray and that all will be right in the end.
The play is magical, whimsical and complex with many layers.
Mojica delivers a solid performance—emotional, athletic and believable. One of the props she uses with amazing vigour and nimbleness is a hammock that hangs centre stage.

Mojica said she wanted to write and perform a piece that was not rooted in Euro ways of telling a story. She wrote the play in pictographs on long sheets of banner paper, a form that came to her and that is used by Guna medicine chant people to notate the healing chants.

“I really wanted to root the performance, a story of victory and transformation that was told from an Indigenous perception, and not only the content, but the structure and the form of how our stories are told.”

Gloria Miguel, Mojica’s mother, plays a wise woman sitting behind a screen telling the old stories. She’s just right for this role, her years of experience and accumulated wisdom coming through in her words.

“This play was a decolonizing process,” said Mojica, prompting her 80-some-year-old mother to state, “I never realized how colonized I was! When I grew up, I was a victim but I wasn’t aware it was wrong to be treated that way. I just lived that way feeling most of the time, ‘I’m dumb, I’m no good, I’m a piece of shit.’”

This play is the hardest thing she’s ever done, she said. She studied theatre in college but, “I’ve got to forget all that and go into a different place. It’s very, very hard but I love it. It’s great that my daughter came out thinking this way, something I’m so proud of, but I wonder, where the hell did it come from?”

Chocolate Woman was presented by Native Earth at their Aki Studio Theatre in Toronto from Jan. 29 to Feb. 3.