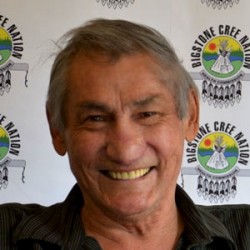 Strong words from Bigstone Cree Nation Chief Gordon Auger calling the Calgary Herald out on its claim that First Nations need to be monitored for every dollar spent of the $8.4 billion allotted to them in the March federal budget.

Those words have earned the Alberta chief accolades from his band members.

On Wednesday April 27, Auger had his letter, titled by the Calgary Herald “Chief: If you think aboriginals have it so good, come and visit us,” published digitally.

“I got a lot of calls from my band members and they’re very pleased,” said Auger.

Auger was responding to a Herald editorial published March 31 that said the “Liberals must ensure full accountability for the billions they are about to spend” on First Nations, saying financial disclosure is expected of the federal and provincial governments and must be expected of First Nations.
The editorial also criticized the Trudeau government for doing away with the First Nations Financial Transparency Act, which required bands to post their financial statements online.

Bigstone Cree Nation had complied with that Act.

“We honoured that because we had nothing to hide,” said Auger.

In his letter, Auger explained that the issue with the FNFTA for most bands was the need to disclose resources earned from private enterprises or band-operated businesses and not just federal dollars.

Auger invited the editors to move to Wabasca “if you truly believe that we have been treated fairly” and enroll their children in a provincially-run school that ranks 657 of 659 or experience a band school, in which children are funded at $3,000 to $4,000 less than their provincial counterparts; or get services from a poorly-funded health system, and live in a home for which the band is funded $112.50 annually per band member.

Assembly of First Nations National Chief Perry Bellegarde had previously told Windspeaker that accountability and transparency about how the federal funding is used will be obvious when these gaps in living conditions start to close.

“Making sure that these dollars are utilized in a very effective way, well, our people are all about that because we want to improve the lives of our people on the ground, and once that happens, you will see these high social costs that people continue to talk about start to come down,” said Bellegarde.

Auger said Bigstone Cree Nation leadership is accountable to its band members, both on and off reserve, with public meetings and a mechanism that calls for 50 per cent plus one for support of proposals.

Bigstone Cree Nation has its own constitution and operates under its own election code—and the election is the strongest tool membership has to ensure accountability of its chief and council.

“We’re transparent, open and accountable first and foremost to our First Nations and we’re going to continue to do that,” said Bellegarde. He also noted that there are numerous reports bands must submit to Indigenous and Northern Affairs Canada on an annual basis.

Auger said he was driven to write his letter because he wanted to educate people.

“People write editorials and they don’t have a clue what they’re talking about. I want to bring the truth to the public, the real truth,” said Auger. “I’ve had enough of First Nations being labelled for all sorts of stuff, people calling me a taxpayers’ burden.”