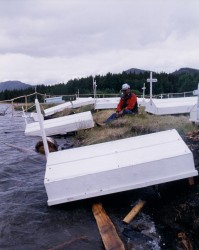 It’s been 62 years since the Cheslatta Carrier Nation faced an offer they couldn’t refuse from B.C.: abandon their soon-to-be-flooded villages and cemeteries in two weeks, or go to jail.

Today, the 130-resident community near Prince George continues to battle the waters as more and more human remains are exposed by flooding erosion–several last month alone–prompting the band to apply on Sept. 30 for a water license to build a water-release facility that would stabilize the Nechako River.

“We’ve had the solution to the problem for many, many decades,” said Mike Robertson, the band’s senior policy advisor. “The solution is to build a release system for the Kenney dam.

“We’ve worked hard to get the land back. Now we’re working to get the water back, and to stabilize the environment ... We resolved, here at Cheslatta, that we’re going to do it ourselves.”

If approved, the nation would seek funding partners for its $280 million Nechako River Legacy Project, which would construct a water release system in the bedrock beside the dam, and re-divert water into its original course – the now-dry Nechako canyon.

Previous provincial attempts to solve the flooding problem – and exposed ancestral graves – were abandoned in the face of the recent economic crisis, Robertson said.

“It’s an ongoing saga here at Cheslatta,” he said. “We’re still fighting it.

“It’s extremely troubling. We just took in some bones we just found last week. It always upsets the people; I had some Elders come in just this morning to look at fresh bones.”

The Cheslatta’s villages were flooded in 1952 with the construction of a dam to power Rio Tinto Alcan’s aluminum smelter in Kitimat. Robertson said “it’s just bizarre” that the firm only pays $5 a year for a license to the water, when his band’s water application cost $10,525.

When the dam was built, it didn’t include a spillway. As a result, the Cheslatta residents had to escape the rising waters caused by massive water releases upstream, which submerged cemeteries and dumped several million tons of debris into Cheslatta Lake.
“There’s sure a lot of unfairness we’ve had to deal with, in terms of the government giving that water away,” he said. “We have to at least try to get it back. The people are resigned to that; they feel it’s a small price to pay for the opportunity to get their water back.

“In a dream world, the dam should have never been built. But now, the town of Kitimat depends on the dam, and Alcan has a legal license to have the dam there and use the water. We don’t have an issue with Alcan; it’s the permitting agencies that we’re challenging.”

If the application is approved, constructing a diversion around the side of the Kenney Dam could take several years. Although generating hydro power is not the band’s goal, Robertson said it needs to find a funding source for the expensive project.

The nation is currently attempting to negotiate for a long-term Electricity Purchase Agreement that would guarantee revenues from BC Hydro and pay for construction. If approved, income from the hydroelectric project would be diverted to fund the Nechako watershed’s rehabilitation.

“Submitting this application formally starts the process of taking back the water that was stolen from us 62 years ago when the government issued a private company license to all of the water in Cheslatta traditional territory, which made billions of dollars in profit,” said Chief Richard Peters in a statement. “After making billions of dollars in profit from flooding the Nechako, the government and industry have never committed to a reinvestment to fix the environmental disaster they created.

“As the project moves forward, we are fully prepared to undergo all required environmental review processes to try and right a wrong that has been allowed to continue for over 60 long and tragic years.”

But with Rio Tinto currently generating hydroelectricity from the Kenney dam, the Cheslatta would also need the mining giant’s permission to proceed as well.

In 2012, the firm returned 11,000 acres of land that had been seized from the band. But unstable water levels have made the land virtually valueless, Robertson argued.

The company confirmed it was in talks about a water release facility, according to a statement issued in September, and said it was committed to cooperating with the Cheslatta as they carry out technical work as part of preparation for a potential diversion project.

With many First Nations in various talks with government over treaties or land use – and the majority of B.C. unceded territory – Robertson hopes a lesson for others might be to look beyond simply lands and resources.

“We want to encourage other First Nations to look at water licenses,” he said. “Very little thought is given to a perpetual, guaranteed water supply.

“This would not only allow environmental restoration of our land and people, but would also secure a source of water for us, for all time.”

In the meantime, the Cheslatta have plans to build what Robertson called a large concrete “tomb of the unknown Cheslatta” in which to store the human remains, caskets and grave houses recovered over the last few decades.

“We’ll inter them in there until the lake is stabilized,” he said. “Then we can re-bury them.”