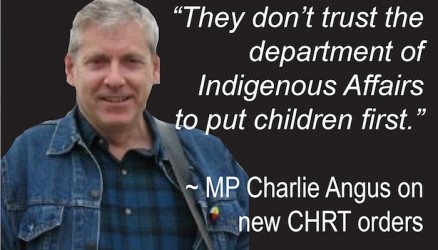 The Indigenous Affairs critic for the federal NDP says the Canadian Human Rights Tribunal has put Indigenous and Northern Affairs Canada under third party management with the new orders it delivered on child welfare April 26.

“They’ve made it very clear. They don’t trust the department of Indigenous Affairs to put children first. They’re effectively putting them under a form of third-party management,” said MP Charlie Angus.

In its 15-page ruling on the continuation of their January remedial order, CHRT members Sophie Marchildon and Edward Lustig said the federal government was not working quickly enough to offer up immediate relief for First Nations Child and Family Services agencies or in implementing Jordan’s Principle.

The CHRT directed INAC to report to the panel in two weeks on the implementation of Jordan’s Principle, which calls for jurisdictional disputes over funding to be secondary to the child’s best interest.

Canada is also to report in four weeks, and on an ongoing basis, on the action it is taking to remedy the underfunding of the First Nations Child and Family Services Program on reserves across the country.
Angus says the government is getting the same treatment it provides to First Nations when INAC believes First Nations are not managing their affairs and finances correctly and there are underlying problems that need to be remedied.

Angus says this latest ruling from the tribunal is “monumental.”

“This ruling is a direct call out of the new government saying, ‘Talk isn’t good enough. You have to act, you have to be shown to be acting and if you’re not going to act, we’re going to hold you accountable,’” he said.

Angus says it’s not good enough that the Trudeau government is doing more than the Harper government.

Response by the government to Tuesday’s CHRT ruling lacked specifics.

“We know the system needs to be reformed, which is why we’re working with Cindy Blackstock, First Nation leaders, provinces, territories and service providers to find a better way of meeting the needs of First Nation children in care,” INAC’s public affairs team said in an email to Windspeaker.

The email also pointed to the money allotted in the 2016 budget as “represent(ing) a concrete first step in addressing the most pressing concerns.”

However, both the tribunal and Blackstock have expressed concern with the $71.1 million coming in 2016-17, saying it is not clear exactly what that funding will be used for. The government has allotted $634.8 million over five years.

“This budget certainly failed Indigenous children in the area of child welfare and that was noted by the tribunal,” said Angus.

INAC refused to say whether or not it would appeal the latest CHRT orders. The government did not appeal the initial CHRT ruling in January.

The government has 30 days to appeal the decision.