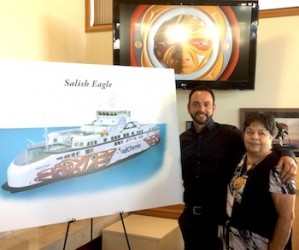 The Stz'uminus First Nation joined BC Ferries and the First Peoples’ Cultural Council to reveal the second of three Coast Salish designs for the new Salish Class ferries.

John Marston of Stz’uminus First Nation designed the artwork that will be on the new Salish Eagle.

Marston’s depiction of beautiful red eagles will adorn the hull of the new vessel. The design represents the strength and respect the eagle carries in First Nations culture. Marston’s work is strongly influenced by his Coast Salish ancestors and their work.

The artwork will also be displayed inside the vessel for customers to view along with a profile of the artist.

“The Eagle is highly respected within our culture,” said Marston. “It is a symbol of our spiritual connection to the natural world. The Eagle has long been connected to us and carries our prayers to the Creator. Our guardian in life, we look to the teachings he offers us.

“The Eagle is beautiful and graceful with the never ending strength to survive.  Over the years as an artist I have learned from our ancestors’ old artworks. It is important to me that this design was strongly influenced by these old masterpieces.”

Last August the First Peoples’ Cultural Council issued a call for artists to submit their portfolios for consideration for the design for the vessels. From 37 expressions of interest, a jury of artist peers and BC Ferries representatives identified nine artists who were invited to submit specific design concepts.

The jury reviewed the design concepts with attention to artistic excellence, Coast Salish artistic style, ability to express the vessel names through artwork, ability to provide digital images for fabrication and ability to meet the project timeline, reads a press statement.

Marston was one of the three artists selected. The others were Darlene Gait from Esquimalt Nation whose artwork was chosen for the Salish Orca, which was unveiled in March. The third artistic design by Thomas Cannell from Musqueam for the Salish Raven will be shared in the coming months.

The Salish Class ferries are currently under construction and expected to be in service in the summer of 2017.