Artist gets the experience of a lifetime in Kandahar 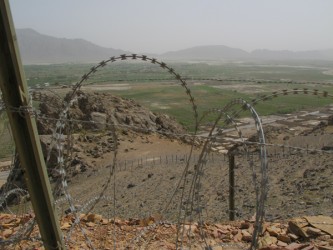 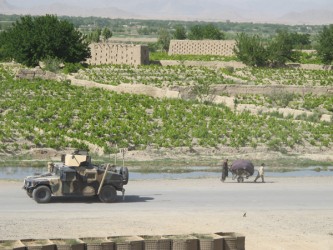 Blackfoot artist Adrian Stimson premiered Holding Our Breath, an exhibition based on his first-hand experiences and observations at a military base in Afghanistan, at the Grunt Gallery in Vancouver Jan. 4.

Stimson received a grant through the Canadian Forces Artist Program that allowed him to spend three weeks on a military base in Kandahar.

“For me it was an opportunity as an experiential learner and an artist to really get in there and sort of get a view of what that conflict really is about,” said Stimson.

“Basically [the Canadian Armed Forces Artist Program] gives you an opportunity to go wherever the forces are stationed, and in my case it was near the end of the Afghanistan crisis.”

Stimson’s exhibition focuses on Aboriginal soldiers. He comes from the Siksika Nation in southern Alberta and his family has a long history of involvement in the military.

“The soldiers I met by coincidence were two First Nations soldiers, so I was able to spend time with them and have discussions around them,” he said.

“When I arrived at the forward operating base I met Master Corporal Jamie Gillman, who is the First Nations soldier from Saskatchewan. Incidentally, I’m currently living in Saskatchewan, and the exact same time I arrived he received a package from an Elder in Canada that had those four elements. So for me it was this really interesting sort of coincidence because none of that was set up.”

Stimson said this coincidence sparked his inspiration when creating art for Holding Our Breath.

“It was coincidental but also very beautiful, so I wanted to honor that history of Indigenous service in the military and what that means. And I think the four directions, the medicines and stuff like that are a part of that history.”

One piece called 10,000 Plus shows the four colors of the Medicine Wheel painted on four large boards, which are adorned with sage, sweetgrass, tobacco and cedar.

The piece “indicates that there are 10,000 recorded First Nations, Metis and Inuit soldiers that have taken part since the beginning of the forces, but then the ‘plus’ is that there are a lot who are never identified. So there’s probably a lot more. So it’s interesting because you take a look at that history and it’s a tenuous one. It becomes a very touchy and a very complex subject.”

Kalvin Smith, a window cleaner who got a peek of the exhibition while cleaning the windows of Grunt Gallery, came to the Jan. 4 opening to get a better look at Stimson’s art.

“I like the four colors that represent the First Nations people all across Canada,” said Smith.

“I really like the fact that the soldiers haven’t been forgotten by the artist community. It’s a different kind of take on everything over [in Afghanistan].”

Holding Our Breath is being shown at Grunt Gallery until Feb. 18.