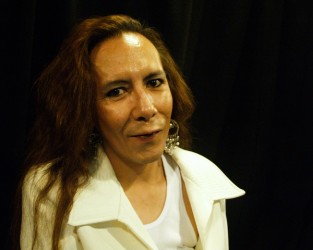 Filmmaker Alexus Young’s face transforms from anxious – the result of the week’s struggle with a noisy and insecure housing situation in one of Toronto’s poorest neighbourhoods – to a sly grin when Windspeaker approaches.

We had interviewed her at a policing conference several years before for an earlier article in this publication , but today the subject is filmmaking. In particular the Métis woman’s ImagiNATIVE film festival short film, “Where We Were Not Feeling Reserved.”

We walk to Toronto’s Allen Gardens, where an 80-metre mural is underway by Indigenous painters, depicting various creation stories and traditions. Nestling confidently on a park bench, Young excitedly discusses her screening. In some ways, her own journey as a filmmaker echoes the artists nearby sharing the story of their cultures, painting scenes in hopes of creating some spark of inspiration in others.

“People are curious and want to know,” she said, brushing her long hair out of her eyes in the breeze. “That’s really encouraging.

“As long as there are people out there who want to listen and hear my story, I will gladly tell it. I’ve gone through so much in my lifetime that I consider myself a survivor. For me, the social aspect of everyday living–everything from trauma to addictions to mental health–it’s a passion for me because I have a mentality where if I can help just one person, it’ll all have been worth it.”

Young is a survivor of the infamous “starlight tours” or “midnight rides” whereby Saskatoon police officers abandoned Native men and women outside the city limits in sub-zero winter temperatures, often stealing their shoes and forcing them to walk home in the snow.

The all-too-common occurrence in Saskatoon – also reported in several other prairie cities–blew up into national scandal in 1990 with the death of Neil Stonechild, a 17-year-old Cree teenager who froze in -28C temperatures from the practice.

“I could have died,” she explained. “And that saddens me, that the others died and I didn’t.

“Yes, it was horrible, but you have to remember I survived. I’m already familiar with the fact that we go through racism, ignorance and just plain disrespect. It’s to be expected. What happened to me in Saskatoon just confirms what we, as First Nations people, are going through.”

“Where We Were Not Feeling Reserved”–the film about her starlight tours story, co-created with artist Jessica McCormack–just scratches the surface of Young’s life.

“I’ve actually gone through much, much worse,” she said. “It gives me pride to be able to stand up and say I’m two-spirited, and I’m not dead. In the past, I’ve lost a lot of transgender sisters who have been murdered simply because they were trans.
“There are some days when I am scared of violence; I’m scared of a rock being thrown at me... There is sometimes a fear I’m going to get shot dead on the street.”

Two-spirited people, in many Indigenous cultures, blur the lines between male and female. Some identify as transgender, but not all. As Young explains, the term is a source of pride and honour, and a reminder of the prejudice imposed upon First Nations with colonization.
“Two-spirited folks–back in the day prior to European contact – we were actually valued members within our societies,” she said.

“But due to–and I hate to use this word–but when the White Man came, they just came and destroyed our culture and way of life. It’s almost like they just uprooted us and threw us into the wind and said, ‘You’re on your own.’”

The result: today, many trans and two-spirited Native people are terrified to return to their reserves, where discrimination has often replaced acceptance.

“If they go home,” she laments, “they’ll get beaten to a bloody pulp.

“That’s a carry-over from the assimilation process. But today, it gives me pride to be able to stand up and say I’m two-spirited, and I’m not dead.”

Young’s experiences of racism and transphobia have led to a blossoming of creativity and courage. She is passionate about sharing her story and speaking out for Indigenous rights.

“If I can’t sway the politicians or bureaucrats or institutions, then at the very least I can continue to encourage my own people and our supporters to carry on the battle,” she said. “Even if we only win one battle at a time, that’s still worth it.

“If I let the anger take over, it’s only a matter of time before I start to hate. I’m not going to embrace the kind of mentality others out there have against us; I’m no better than them... I’m definitely not giving up. By telling my story, hopefully others won’t give up too.”

With human rights outrages such as Young’s, why didn’t she and McCormack simply film a traditional documentary? Why the collage of grainy historic footage, inter-woven with cartoonish animated sirens, caricatured police frowns and narration-less news footage?

“We chose that style because ... I still never know if there is a vigilante policeman out there who has a mandate to kill me,” she admited.

But animation, she adds, also conveyed a story far larger than her own. It’s not about Saskatoon, or even individual police officers. It’s the story of racism and assimilation in Canada, a system of “segregation” upheld by the Indian Act, Young points out.

“I look at it as being almost like a story-book,” she said. “It’s something that’s going to grip you because of the animation used.

“I’m not actually showing a picture of Saskatoon, because I’m not blaming Saskatoon. The people who live there are not to blame; it’s the police and the justice system that are to blame... If we did it by video, it would showcase the beauty and glamour of Saskatoon, as opposed to the horror of what happened to me. But the night skyline is absolutely enthralling.”