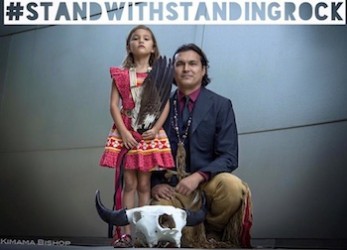 The Assembly of First Nations is standing in support of the Standing Rock Sioux Reservation’s fight against construction of Dakota Access Pipeline across their traditional territory.

Manitoba Regional Chief Kevin Hart, co-chair of the Climate Change and Environment Chiefs Committee and portfolio holder for alternative/green energy, joined international human rights experts and Indigenous leaders to speak out against the lack of meaningful consultation with Standing Rock Sioux prior to the pipeline's development.

"The call of the Standing Rock Sioux has echoed across Turtle Island. Now it is up to us to respond by standing up to defend these precious waters and sacred lands," said Hart. “It's no coincidence that opposition to this pipeline is mounting. This pipeline would travel through the Standing Rock Sioux Tribe's ancestral lands and pass within a half a mile of its current reservation. Indigenous peoples make the least impact on the environment, and yet we are the first to experience the impact of climate change.”

Dakota Access Pipeline is a $3.8 billion megaproject in the United States. Thousands of Indigenous and non-Indigenous supporters from across the Canada-U.S. border have come to the aid of Standing Rock Sioux to help protect their lands and waters from potential environmental damage.

“No pipeline construction should ever begin until Indigenous rights and human rights are upheld and the Indigenous peoples have provided their free, prior and informed consent consistent with the United Nations Declaration on the Rights of Indigenous Peoples,” said AFN National Chief Perry Bellegarde.

“The Standing Rock Sioux are demanding that their rights, their people and their traditional territories be respected. I offer my support to them and to all those standing with them to protect the land, water, and sacred burial grounds of the Standing Rock Sioux, and I thank my colleague Regional Chief Hart for being there on behalf of the AFN.”

The Standing Rock Sioux have sued the U.S. federal government, and are seeking an injunction against the U.S. Army Corps of Engineers, which authorized the pipeline's construction despite the Tribe stating that the environmental assessment did not take the health, well-being or spiritually significant sites (such as burial grounds) into consideration while choosing the pipeline's crossing route, reads a press statement.