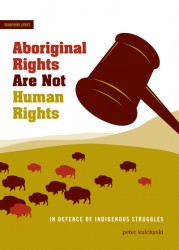 When hundreds of police raided a Mi’kmaq anti-fracking blockade near Elsipogtog First Nation only days after the United Nations Indigenous rights envoy left the country, many immediately appealed to James Anaya to speak out against the RCMP action.

Over the years, sustained–and successful–pressure was aimed at a recalcitrant Prime Minister Stephen Harper to sign onto the UN Declaration on the Rights of Indigenous Peoples (UNDRIP), which the Conservative leader finally did in 2007.

But the widespread push to hold Canada accountable to international rights norms when it comes to Aboriginal communities caused one University of Manitoba Native Studies professor to examine the celebrated document more closely.

The result: Peter Kulchyski’s provocatively titled new book, Aboriginal Rights are not Human Rights (Arbeiter Ring, 2013). He admits his conclusions about UNDRIP, outlined in one of the 173-page book’s chapters, might raise some eyebrows in Indian Country.

“Much of the struggle of Aboriginal people is oriented around trying to gain recognition and protection for Aboriginal and treaty rights ... I found (UNDRIP) was deeply flawed. That’s not popular for me to be saying that!”

As he defines them, Aboriginal rights are communally held rights rooted in distinct cultures and practices enshrined in the Canadian Charter of Rights and Freedoms. The constitutional document also ensures that the human rights enjoyed by all individual Canadians cannot trump the inherent collective rights and culture of Aboriginal communities.

On the other hand, he argues that human rights are European concepts applying only to individuals, not to communities or cultures.

“There are good things about the UN Declaration,” he argued, “but structurally there’s a problem in that it doesn’t see the fact that human rights can be used to violate Aboriginal rights.”

Former Neskonlith First Nation chief Arthur Manuel, chairman of the Indigenous Network on Economies and Trade, told Windspeaker that Kulchyski argues valid criticisms of UNDRIP, but that international human rights mechanisms are still important because “you need to use all the tools you can access.”

While Kulchyski agreed that both forms of rights can be useful as tactics, Manuel agreed that inherent Aboriginal rights under Charter Section 35 continue to form a backbone of many struggles.

“There have been issues about the UN Declaration,” Manuel acknowledged. “It’s not really a law, but a declaration between nations.

“But UNDRIP does another thing: it applies self-determination to Indigenous Peoples. Canada tried to water it down a bit, but they are accountable, without question, to it ... Section 35.1 hasn’t been able to force the government to recognize and accommodate Aboriginal title, but has given us enough protection that they have to get our approval to modify or extinguish it.
That’s where Canadians have to realize that Canada is a real human rights violator and culprit under the present UN policy – you can’t extinguish title.”

Lest anybody mistake his slim, accessible book’s title for some Tom Flanagan-esque rightwing tract denying Aboriginal people have rights, Kulchyski’s offering is subtitled, In Defence of Indigenous Struggles – struggles to which the scholar, as a longtime non-Aboriginal activist, is no stranger.

His decades of advocacy and accompaniment with Aboriginal communities, including Grassy Narrows First Nation in Ontario, northern Manitoba’s Cree communities, and Inuit on Baffin Island, have shaped his driving call to a “bush philosophy” rooted in rural hunting culture.

His previous book, The Red Indians, explored a history of Indigenous resistance to capitalism in Canada, and as a non-Aboriginal, his close involvement with the group Defenders of the Land has highlighted a strategy of linking together remote rural Indigenous communities in the disparate reaches of the country.

Several chapters explore the controversial politics of his own Manitoba backyard – Indigenous struggles against hydroelectric power projects in the province’s north, an injustice Kulchyski hopes to draw more attention to despite rare media attention nationally.

“Once again there’s a wave of hydro projects in northern Manitoba,” he said, “but they’re not on the national radar because the energy issues we’re more interested in today nationally are tar sands.

“What’s happening here is tragic in many, many ways. They’ve re-engineered the rivers ... They have to flood significant acreages of land, which releases mercury into the water that gets into the food chain through the fish. There are absolutely disastrous local and ecological impacts. Yet they keep advertising (hydro) as ‘clean.’ They should recognize the damage they’re doing.”

Aboriginal Rights are not Human Rights deals with far more than the United Nations or specific protests. Kulchyski brings much-needed and long-overdue attention to anti-hydroelectric movements in his province, which he described as being unfortunately eclipsed by other priority environmental issues, but deserve criticism.

“I learn something from every community I travel to,” he said. “They’re all unique and their particular problems are always unique.

“I find it’s the hunting families in any community I go to where I am going into the bush, and whenever I get a chance I go into the bush with them and see how people are living. It gives me a particular perspective on Indigenous peoples’ struggles.”

As he writes in the book, the “bush ... allows us to think a lived relation to and in this landscape… You can find the bush, even in the Eaton Centre, but first you have to get the mall out of your head.”

As Kulchyski sees it, it’s in the “bush” where we find “the ghosts of this country,” from the violence of Canada’s history; he adds that “no amount of pavement” can pave over that dark history. But the bush is both a philosophical symbol and lived reality for many rural communities, and one Kulchyski hopes might inform a forward-looking strategy for Indigenous peoples seeking liberation from ongoing colonialism.

“We’re in a moment when things are still reactive, as happened out on the east coast,” he said, alluding to events at Elsipogtog First Nation. “A community is responding to a threat, that struggle escalates, and there’s a fairly large solidarity movement.
“We will turn a page when communities decide themselves not to wait for something to happen, but to push the issues and be proactive – to plan coordinated actions that push the government to change some of its worst policies.”