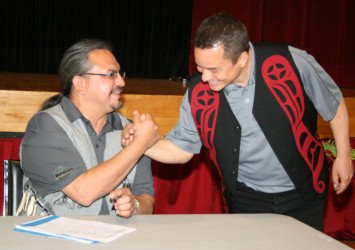 Shawn Atleo, the national chief of the Assembly of First Nation, kicked off his re-election campaign on May 24 in the style he has become known for, with family and culture, song and spirituality surrounding him.

The chief was escorted into the Chief Joe Mathias Centre in North Vancouver by Squamish drummers and singers, led by Squamish Chief Ian Campbell. He spoke in his traditional language, and then in English told Atleo that he commended the national chief for the change he was bringing to Canada’s policies and laws, things that have impeded First Nations authority.

Organizer of the event, Michelle Corfield, introduced Atleo, recounting the path that had led him to this time. She said Atleo had put the foundation for change in place during his first three years in office, and now was time to build on that foundational work.

“His work is not done yet,” she said.

Atleo received a standing ovation as he approached the podium to speak.

“Are you ready for round two?” Atleo asked the crowd.

The first round was a battle royale in 2009 in Calgary against Saskatchewan’s Perry Bellegarde. Voting went 23 hours with round after round of ballots cast, with Atleo inching forward to the 60 per cent support benchmark that has been the bane of many an AFN election. The 2009 election however made history with the number of voting rounds.

When it was apparent that Bellegarde was losing support rather than gaining it in the early morning hours, he conceded the contest and Atleo was crowned.

This year the team said it is prepared for whatever may come, said Grand Chief Doug Kelly of the Sto:lo Nation, a campaign strategist for Atleo alongside Grand Chief Stewart Phillip, president of the Union of BC Indian Chiefs.

Team Atleo loves Atleo more than the other teams love their candidates, said Kelly about what he learned in that first campaign.

Back then there were concerns about Atleo’s age, experience and strength, said Kelly. Today, those fears and doubts in Atleo’s abilities have proved unfounded, he added.

But not all of Canada has been won over by Atleo’s obvious charm. There has been criticism of Atleo’s conciliator style, with it often interpreted as assimilationist. Some critics say Atleo hasn’t got a fight in him, and has failed to raise his fist at government when necessary.

But Atleo’s team believes he is making headway on a number of important fronts, and Phillip recounted a few at the re-election launch party.

Phillip said the national chief promised movement on education, and there is legislation in the works that will be tabled in September. Atleo promised to bring First Nations, the Prime Minister and his ministers to the table to discuss big concerns, and the Crown-First Nations Gathering was held in January.

Phillip said that Atleo is a mediator, a facilitator, and has made himself accessible to nations from coast to coast.

“I am absolutely convinced you will be re-elected,” Phillip said.

In his speech, Atleo re-committed himself to improved education for First Nations. He talked about a boy he met in northern Manitoba, who despite living in a shack with no running water, no electricity and no toilet facilities, was still optimistic and hopeful.

“He has plans,” said Atleo. He said his responsibility to such children in First Nations communities across Canada is to ensure they have an equal chance of education success.

Atleo seems to be bringing the same base of votes to this re-election campaign, mostly the BC block of 203. The nomination papers were signed at the launch event, and the chiefs in attendance were primarily from that core support. There was one notable exception, and that was Chief Allison Matalic from Listuguj in Atlantic Canada who flew in for the campaign launch.

Chief Bob Chamberlin of northern Vancouver Island, who was among that core support in 2009, is standing today with Atleo.

“I don’t think it will be very hard to re-elect you as national chief,” he told Atleo. He said it is an “uphill battle” working with the Harper government. He said First Nations need an articulate person to speak to the Prime Minister.

Frank Brown from Bella Bella and the Heiltsuk nation said First Nations were about to embark on a defining moment in their history with the Conservative government’s omnibus bill, a bill that will reshape the environment and fisheries, among many other “Trojan horse” initiatives hidden within it.

Heiltsuk is at “ground zero” of a great fight, protesting tanker traffic and oil delivery through its territory and Atleo has stood shoulder to shoulder with his nation in that fight, he said.

Atleo’s expected competition so far is Terrance Nelson, who was an also ran in Calgary in 2009, dropping out with Bill Wilson on the first ballot. AFN Regional Chief Bill Erasmus has also indicated he will run. And academic Pam Palmater has also indicated she will consider letting her name stand. Candidates however have until June 12 to line up official support and file the necessary paperwork.

The AFN election will take place in Toronto during the summer assembly July 17 to 19. Voting begins July 18.

Photo caption: National Chief Shawn Atleo thanks Chief Willie Charlie for endorsing his nomination in Atleo's bid for a second term in office.