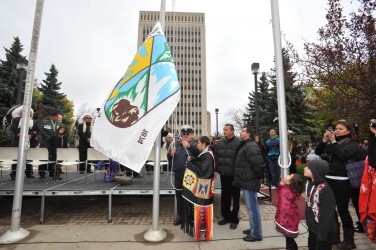 Hundreds of people gathered in Regina on Oct. 14 to witness history in the making. A first in Canada, the Treaty 4 flag now flies permanently alongside the municipal, provincial and national flags in front of Regina‘s City Hall.

Mayor Pat Fiacco said the raising of the Treaty 4 flag signifies the continuance of the relationship that was established between First Nations and non-Aboriginal people 137 years ago when Treaty 4 was signed at Fort Qu’Appelle.

During the ceremony Fiacco said, “Today, we acknowledge the importance of Treaty, not just to First Nations people but to all Canadians, and the message of community and sharing intended by Treaty.”

Fiacco recalled how the idea was born when Elmer Eashappie, a member of the Carry the Kettle First Nation, approached him. “Elmer has been my cultural advisor and friend since I became mayor. He shared with me the story of former Chief Gordon Oakes.”

Eashappie had met Elder Oakes in 1999 during a Sun Dance. The following year, Oakes took him and the late Bob Boyer aside to speak with them privately. “In that teepee, he asked Bob and me to make a promise to him to educate the white people about who we are as Indian people. After that Gordon lit the pipe and we smoked on it,” said Eashappie.

Boyer passed on in 2004. “I knew, then, that it was up to me to fulfill that promise,” said Eashappie. When he found out later that Oakes had designed the Treaty 4 flag, the way to fulfill his promise became clear. “I set up a meeting with Mayor Pat Fiacco just after he was elected. I brought tobacco and told him what it represented; he accepted it, and for the next eight years I took him to several southern Saskatchewan First Nations to meet with Chiefs and Councils. He learned the protocols and how to build relationships with the people.”

In 2008, Eashappie spoke to Fiacco about flying the Treaty 4 flag at City Hall as a means for Eashappie to honour his promise to Oakes. Two years later, the Oakes family gave their permission for the flag to fly. This past May, the city made it known publicly that it intended to fly the Treaty 4 flag.

“Because of the significance of the event, we had a grand entry. The horse riders gave the eagle staff to the dancers who danced it and the Treaty 4 flag in,” said Eashappie.

Larry Oakes, one of their sons, said seeing his father’s dream come true was an emotional event for the entire family.  “The raising of the flag signifies not that the work is done now, but that it must continue. Let‘s figure out what this symbolic event means; we have to respect the spirituality behind it. There are good people in this city, and they are doing the work that is asked of them with First Nations people. It‘s about what each individual can do to contribute.”

Eashappie doesn‘t consider his work done either. “My plan is to approach other municipalities, the provinces, and the federal government, so one day, all Treaty flags will fly on Parliament Hill.”

Fiacco encouraged other municipalities to consider their relationships with neighoubring first Nations. He said, “Regina has a large First Nations population, and they need to know that they have the city’s support; support they may not be able to get from elsewhere. I would suggest that for us the raising of the Treaty 4 flag is a continuation of the journey.”