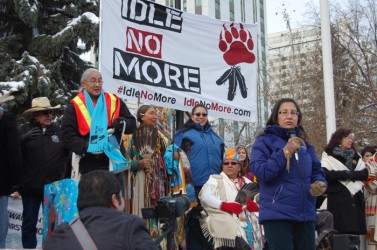 The four Saskatchewan women who brought the protest movement back to the grassroots through Idle No More have been recognized by an American magazine as part of its “Top 100 Global Thinkers.”

Foreign Policy’s “The Naturals” category, in which the four women are included, is about people who “have identified ways to slow the damage we are inflicting on both our surroundings and ourselves. They have restored wastelands to their original beauty. They are helping humanity become a better steward of the planet and, in the process, ensuring that our future will be long and fruitful.”

McAdam said that when they sat around the kitchen table and conceived Idle No More, the women never expected it to hit the heights it did.

“At the very best, we had hoped to reach people on Turtle Island. But for it to go global is incredible. It’s amazing, amazing,” she said. McAdam, who has a law degree, is a direct descendant of treaty makers.

It was the introduction of two successive omnibus budget bills, C-38 and C-45, which infringed on Aboriginal rights and impacted the environment, and the hunger strike by Attawapiskat Chief Theresa Spence, whose leadership had been taken away when the federal government appointed a third party to manage the First Nation in light of a housing crisis, that spurred the four women into action.

“We went into this not excluding men. It just happened like that,” said McAdam, who resides in the Whitefish Lake Reserve lands.

Wilson is a Nakota and Plains Cree from Kahkewistahaw and Gordon is from Pasqua, both in Treaty 4 territory. McLean is from Treaty 6 territory, but is a third generation immigrant of Scottish and Scandinavian ancestors.

McAdam said that in December 2012, when Idle No More went into action, it was also in direct response to her Ottawa sources telling her that the Harper government claimed that Indigenous people would not speak out.

“Today we’ve shown them that we’re standing up and we’re defending. That’s what we’re doing,” she said.

That defence has crossed the country over the past year, with both mass organized rallies in key locations as well as issue-specific rallies. Flash mobs and flash round dances also became an element of the movement and universities hosted panels and lectures to discuss why Idle No More had taken off like it had.

While Idle No More was active in late 2012 and early in 2013, the summer-time saw a lull until Oct. 7, when mass rallies were held throughout the country to mark the 250th anniversary of the British Royal Proclamation. Since that time, other mass rallies have taken place, including a solidarity rally with Elsipogtog, marking the New Brunswick First Nation’s fight against fracking and shale gas development. Confrontation with RCMP at Elsipogtog escalated into violence, with the RCMP using fire hoses, pepper spray, tear gas, rubber bullets, and dogs.

Foreign Policy points out that the Idle No More movement has not only spread across Canada but has also had solidarity rallies in the United States, Europe and Australia.

“Any kind of recognition gives a higher profile to ldle No More. It enhances the voice and amplifies the voice of Idle No More,” said McAdam.

This is Foreign Policy’s fifth list of “Leading Global Thinkers.” In making its selections, the magazine accepts nominations, as well as looks at the year’s biggest stories before coming up with its list.

“The vast majority are not only accomplished—they are affirming. They are doing nothing less than bringing peace, protecting the planet, and pushing the boundaries of the possible. Their achievements are the reward of talent and dedication, and we all benefit,” said Foreign Policy.

McAdam was in Washington, DC, on Dec. 12 to be recognized by the magazine. She says what struck her about the other recipients was their sense of humour.

“That says something about the calibre of the people there,” she said.