Women plan to block Douglas Channel with 7000 metres of yarn 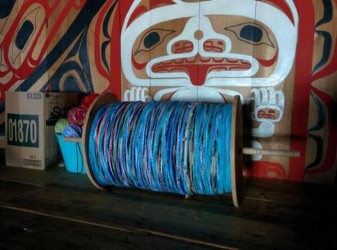 Three days after the federal government granted approval to the $7-billion Enbridge Northern Gateway oil sands pipeline, a group of women in Gitgaat First Nation held the first — albeit symbolic — blockade of the controversial project.

It is no doubt the first of many to come, as opposition continues amongst many First Nations in the province, who say they will never back down and allow the project through regardless of government rulings.

The June 20 plan is for boats from the northern B.C. community to stretch a massive chain of yarn buoyed by corks across the widest part of Douglas Channel, the proposed oil tanker route from Kitimat to Asia.

“The women and kids got involved and crocheted — man! — over 20,000 feet,” Gitgaat chief Arnold Clifton told Windspeaker. “It’s two miles from Hartley Bay over to the other side at the widest part of the Douglas (Channel).

“It’s not the first time our people have blocked the channel. The last time they talked about oil coming through our area they had a blockade … but they used boats.”

Clifton said that neither Calgary-based
Enbridge nor the federal government consulted his community, and as a result they’re launching a lawsuit against the proposal alongside several other First Nations. The community is concerned about an oil tanker spill in their territories, which cover 90 per cent of the channel.
That legal action follows an announcement, distributed by the Union of B.C. Indian Chiefs, that nearly 30 bands and tribal councils are putting the final touches on litigation to halt the project’s construction.

The colourful crochet action comes after the Conservative government in Ottawa granted approval June 17 to the Enbridge proposal, but only if the company could satisfy all 209 of the National Energy Board’s recommendations covering everything from increased pipeline and tanker safety to consultations with aboriginal peoples.

That is on top of B.C. Premier Christy Clark’s famous “five conditions” which additionally demand higher economic benefits for the province. Enbridge has satisfied only the first condition — passing the NEB’s Joint Review Process — but says it can meet all prerequisites within “12 to 15 months,” its leader Janet Holder told reporters on June 17.