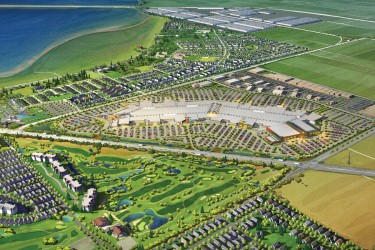 Tsawwassen First Nation began construction in January on two malls after two years of planning and site preparation.
Tsawwassen Mills and Tsawwassen Commons are destination retail developments being constructed in partnership with Ivanhoé Cambridge and Property Development Group, respectively, on the First Nation’s lands. Bass Pro Shops is the first of several major marquee retailers that will be featured at Tsawwassen Mills. Walmart will be an anchor retailer for the Commons mall. “This development partnership is a major step towards achieving our community’s vision under our Treaty,” said Tsawwassen First Nations Chief Bryce Williams. “We are delighted to partner with world-class developers to realize the commercial/retail element of our land use plan. Combined with our complementary agricultural, residential, and industrial activities, this development is a significant move forward in creating a truly sustainable community for our members.”

The Wet’suwet’en First Nation has sent a warning to Premier Christy Clark to begin Crown consultation immediately on the establishment of the new LNG export industry. “Time is running out,” said Chief Karen Ogen. “If Wet’suwet’en is to participate meaningfully in the LNG industry choices and plans for our Aboriginal title lands, the BC government must provide us with the necessary information to begin Crown consultation on the new LNG industry.” Ogen said First Nations’ support should not be taken for granted and consultation should not be considered an inconvenient afterthought. In August 2013, the Wet’suwet’en First Nation wrote to Clark requesting a meeting to begin Crown consultation. To date, the BC government has not responded to the Wet’suwet’en request, a press release notes. “It is completely unacceptable to wait five months for a reply to a letter sent in good faith regarding this important matter,” said Ogen, “While Wet’suwet’en has been forced to wait for Crown consultation to begin, government and industry have been meeting behind closed doors to finalize high level decisions, fiscal arrangements and strategic plans for the new LNG export industry.  It is widely expected that taxation, royalty, and regulatory legislation and initiatives for the new LNG industry will be introduced during the 2014 spring session of the Legislature.” Ogen cites the Wet’suwet’en people’s Supreme Court of Canada Delgamuukw case, in which the court held that Aboriginal title has an “inescapable economic component.” Choices about the use of title lands are for the community to make, said Chief Karen Ogen. “By proceeding unilaterally to develop a new industry on the backbone of our territory, the province is running roughshod over those constitutional guarantees.” Ogen said Clark has until Jan. 31 to provide information requested. After that time, the nation will pursue next steps to ensure the province fulfills its constitutional obligations.

Nuxalk First Nation Chief Wally Webber wasn’t happy with a wager between the Seattle Art Museum and the Denver Art Museum on the Seattle Seahawks and Denver Broncos match-up in the Superbowl. Each museum has put up a prized piece of their collection to trade, temporarily, to whichever city’s team wins the game. The Seattle Art Museum chose a forehead mask from the Nuxalk Nation to be put on display in Denver if the Broncos win, the CBC reports. It’s because the mask looks very similar to the Seahawks logo, said the Seattle museum’s representative. Webber said no one from the museum had the courtesy of calling to tell his people about the wager. “They informed the Broncos about it and they’ve never contacted us. If they’re not going to respect what they have of ours, send it back to us where it will be looked after right,” Webber said.