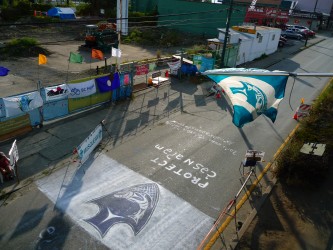 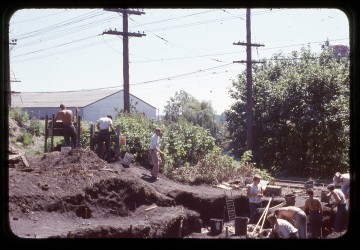 Tales drawn from 5,000 years of existence are woven together through audio, visual and modern technology to breathe life into the colorful history of the Musqueam First Nation community.

The Musqueam, Museum of Vancouver and the Museum of Anthropology have partnered on a series of three distinct exhibitions, opening simultaneously this coming January known as c–YsnaîYm The City Before the City.

Terry Point is co-curator of the Musqueam First Nation exhibition. He said visitors should expect a unique experience from each location that utilizes different forms of storytelling to shed light on a 5,000-year-old history.

“(Our Elders) really want people to understand our culture was sophisticated, a rich and thriving society here before contact,” Point said. “I think we captured most of what we’re trying to portray in the exhibit.”

Over the past 125 years, archaeologists have mined the Musqueam c–YsnaîYm village and burial ground for artifacts and ancestral remains, many of which are in museums and collections around the world. Historically, it was one of the largest villages of the Musqueam approximately 2,000 years ago where generations of families called home.

The land is located in the area now commonly known as the Marpole neighborhood in Vancouver.

The contested site has intersecting railway lines, roads and bridges to Richmond and a miscellaneous assortment of buildings and developments that tread on the Musqueam traditional territory.

In 2012, the community members held a 200-plus day vigil when ancestral remains turned up at the c–YsnaîYm village, which stopped a proposed condominium development in its tracks.

“We are still here and still have a thriving community,” Point added. “Understand that there is a wealth of knowledge that comes from our Elders and that’s what we are here to protect, is that significant culture and brilliance.”

Now, the Musqueam has a population of 1,200 people. Nearly half live on a small portion of their traditional territory located south of Marine Drive near the mouth of the Fraser River, where their ancestors harvested the resources of the delta.

“We’re trying to protect these little pieces of history that people have dismissed for such a long time,” Point said. “A better understanding of where they are and who the first people were.”

The three exhibits will run simultaneously at the Museum of Vancouver, Museum of Anthropology and Musqueam Cultural Education Resource Centre and Gallery.

Point said the exhibits will have different features and interactive displays to best tell the Musqueam stories. For instance, at the Museum of Vancouver, the exhibit will show how the community would tell time through the seasons.

“Also, within that section, there’s going to be photos both historic and contemporary of Musqueam people,” he said.

The museum is also creating casts of what they think some Musqueam people looked like from unearthed skulls.

“We’re going to have one of our traditional stories of the two-headed serpent illustrated with a listening station to hear the whole story,” he added.

There will also be a station featuring the language spoken by the Musqueam and visitors will get a crash course on it, according to Point.

At the Musqueam centre and gallery, the exhibits will feature belongings including a piece of fishing net that is 2,500 years old. Other elements include comparing contemporary medicinal pieces and tools with their ancestral origins.

“We’re really trying to focus on learning about the distant past and the way to do that is to compare and contrast it with the contemporary,” Point noted.

The exhibit was put together through an exhibit team composed of curators and many community members, according to the Museum of Anthropology’s curator Sue Rowley.

“Each of the exhibits has very different flavors to them but they’re all one story,” she said. “Visitors are going to get three amazing opportunities to hear and see the Musqueam and learn about the ancient past. So many people think Vancouver is a new city.”

“It’s the importance of community,” she said about the exhibit’s significance. “The fact that it’s not a show about the ancient past. It’s a really a show about … today and the strength of the community today.”

The University of British Columbia’s museum will feature no belongings, but instead tell the story through visual presentations and interactive displays. Some will feature community members talking about major issues, teachings, values and highlights of the vigil.

One display is an interactive table with six replicas of ancient belongings and six contemporary ones. When a piece is placed on the table, it will generate content about that particular piece.

“There will be an installation which is a very small one to six person experience of sitting as if you were at the kitchen table with an audio installation of the advisory committee talking about the kinds of things they would talk about at the kitchen table,” she said. “It gives visitors a privileged aspect as if you were sitting at the … table.”

For more information about the exhibits, visit thecitybeforethecity.com.